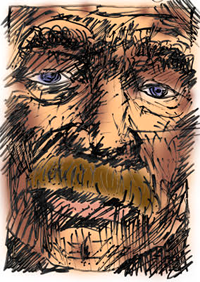 Obie Oberholzer is a non-prize winning South African photographer and writer. He is a member of the German picture agency Laif, CEO of the Blue Horizonliners and president of the Fokkolfonteiners.

Many see him as a carefree vagabond and he has often been called a visual thug.

During his long career of over 40 years he has produced 12 coffee table books and has had over 35 local and 11 international one-man exhibitions.

His best friend that journeys Africa with him is called Sense of Humour and on the dusty dashboard of his Isuzu bakkie is written “Follow that dream”.

"This story started with a dream in Pretoria some 44 years ago and continued as grains of silver suspended in photographic paper, later becoming electronic pixels – culminating in a lifetime of images. I saw the country in tonal values of black and white, striving for subtle detail in the shadows and highlights. Sometimes this was very difficult, as we lived in a land of extreme contrasts."