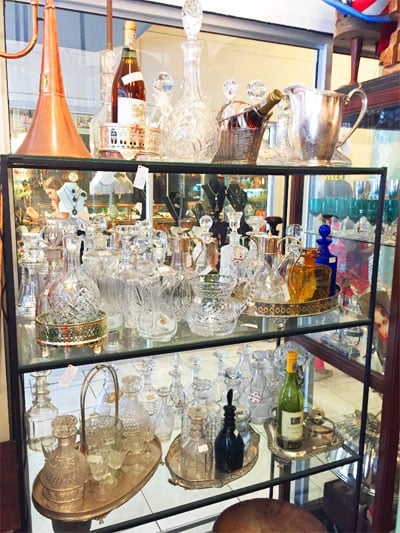 While paging through a travel journal featuring the city of Amsterdam and its blend of art museums / galleries and coffees / coffee shops, I could not help thinking about some of my own experiences. For instance, on a recent visit to the National Portrait Gallery in London, as I was entering the ticket office on the ground floor, the aroma of freshly made coffee swirled around in the foyer, descending from one of the floors higher up, where clearly there was a coffee shop for visitors to sit and relax in between viewing art. 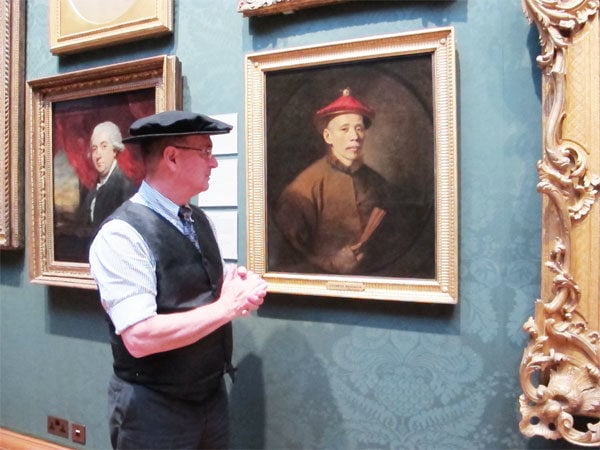 The writer at the National Portrait Gallery in London, viewing portraits

More recently, as coffee shops and roasteries have become more fashionable, staff in coffee shops are priding themselves on making this delicious brew, topped with the sheen of the crema. Today, there are competitions for coffee-making, such as the competitive world of latté art – go to https://www.youtube.com/watch?v=6FHr9Gadzn8. The Speciality Coffee Association of Southern Africa runs a series of coffee competitions for baristas – https://scasa.co.za/blogs/competitions. Travelling in Rome at the end of 2017 brought me to the classic Antico Caffè Greco (http://www.anticocaffegreco.eu/), established in 1760, art filling its walls, with coffee served as it probably has been over the last three centuries or so; and, since those early years of its existence – already then – it has been well known for its excellent coffee and visited by famous writers, such as Byron, Stendhal and Goethe. Today, it would be hard to deny that throughout the world, the espresso is recognised as the quintessential Italian coffee. 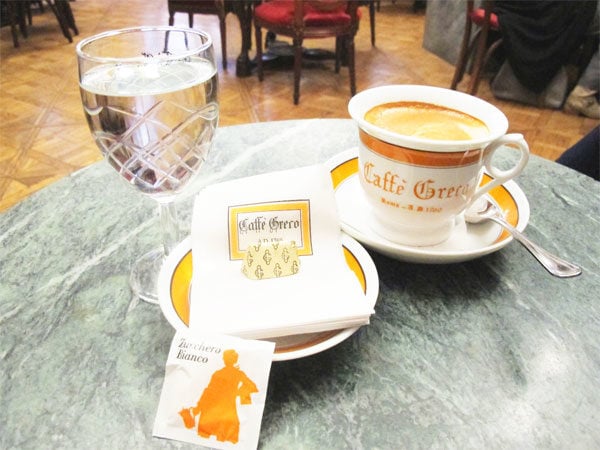 The coffee served at Antico Caffè Greco, established in 1760 in Rome 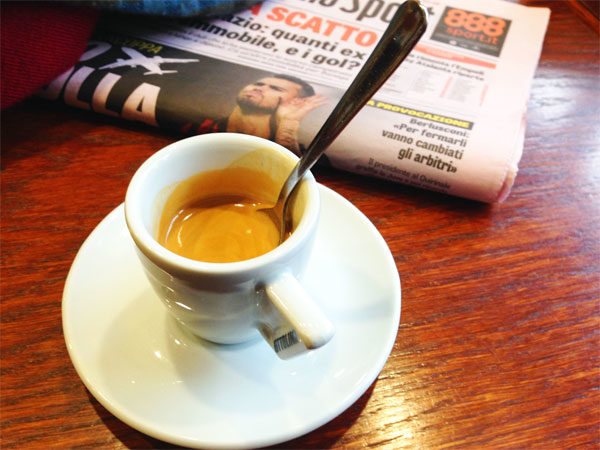 An Italian espresso – today, a hallmark in the Western world

Our own city of Cape Town has its fair share of coffee roasting and coffee shops, and some areas, such as around the Church Street Mall, offer much more than just coffee or little coffee shops for the visitor – there are also art galleries and antiquarian shops containing all sorts of collectables, from art to Art Deco fashion and memorabilia. These can be suitable venues for tourists who seek things to do other than the conventional stuff like clambering up Table Mountain or chartering a yacht for sundowners off the Clifton Beach coastline – and they are good for a rainy day! The Long Street Antique Arcade, situated with one entrance on Wale Street and the other on Long Street, would require at least an hour-or-so’s browsing for viewing anything from Art Deco, pictorial art and fashion to general collectables such as watches and pens, as well as memorabilia in general – https://www.theantiquearcade.co.za/. 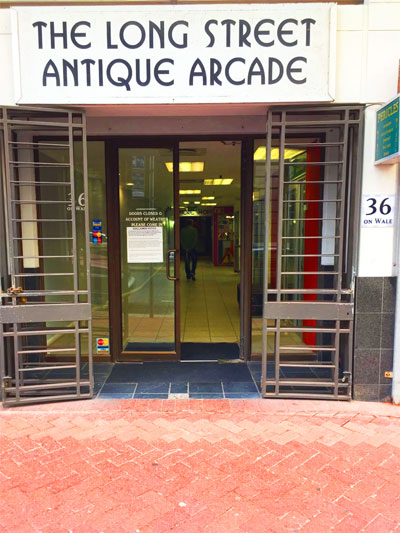 Above: The entrance to the Long Street Antique Arcade from the Wale Street side. This has been the centre of the antique trade in Cape Town since its establishment in the late 1990s, and there are individually owned antique shops catering for a wide variety of different tastes. One of the shops concentrates on military memorabilia and coins, as well as Zippo lighters and Swiss army knives; there is featured a full-size photograph, published by the Cape Times, of South Africa’s greatest icon, Nelson Rolihlahla Mandela, aka Madiba because of his princely origin, or Tata, the “Father of the Nation” (picture below). 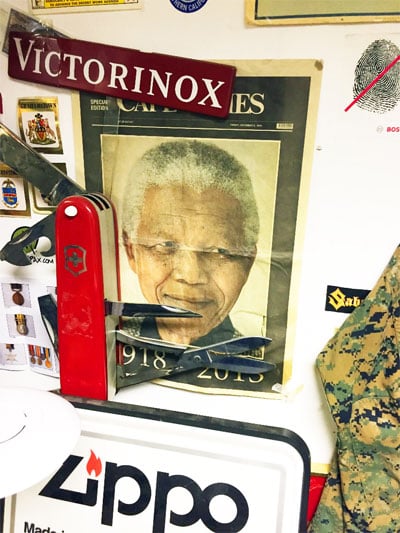 Shopping and looking for things to buy either for one’s own requirements or as gifts to take back home can be tiring, and coffee shops are important for stopping over and mulling over things. Just around the corner from the Long Street Antique Arcade is a sort of informal extension of antique stalls in what is known as the Church Street Mall (weather dependent). And right there, too, is a coffee shop that’s been there for ages; it’s here, with the tables spilling out onto the open-air mall, that coffee lovers can come to sit and relax and watch the passing trade – watch the city go by, as it were. There is also a breakfast menu available – go to http://www.themozart.co.za/. 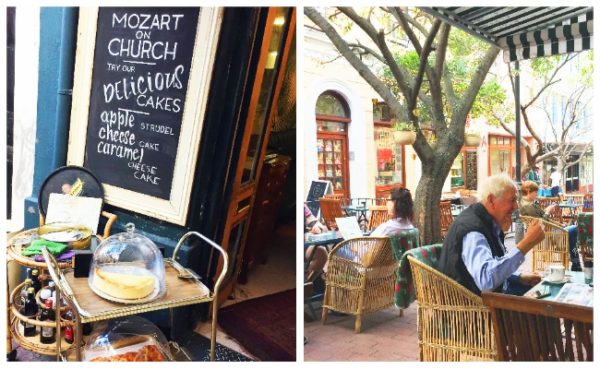 Café Mozart has been at its current site for decades. It has a bit of a Parisian ambiance, and sitting here for an hour will provide ample insights into a vibrant and energetic community, feeding off Long Street at the upper end with its shops and restaurants, and – a little lower down – Burg Street, where the city’s newspaper buildings are today. 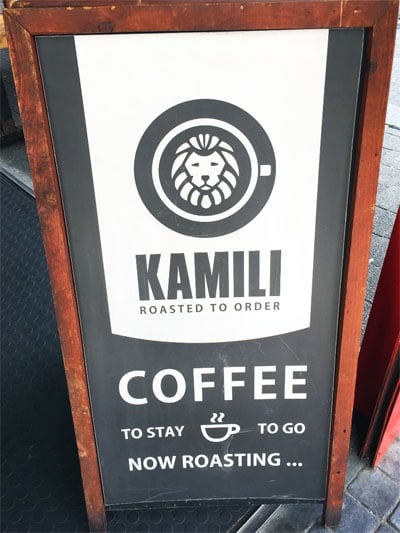 A little way down Longmarket Street (in the direction of the sea) is the Kamili Roastery, where the “perfect” coffee can be found, that is, if you’re literally translating the Swahili, which means that – perfect! Here, you can even buy a bag of beans as a memento to take back home with you. Visit https://kamilicoffee.co.za/ and enjoy sitting down over a coffee in between your tour of the galleries and shops in that area. 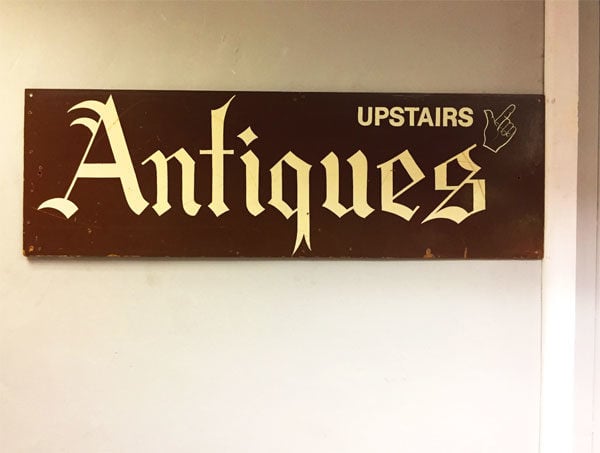 Look carefully in the area of the Church Street Mall for the signs directing visitors to the various shops. Some of them are on ground level; others are upstairs, where the pink staircase of Café Mozart leads to an area of old books and other memorabilia. 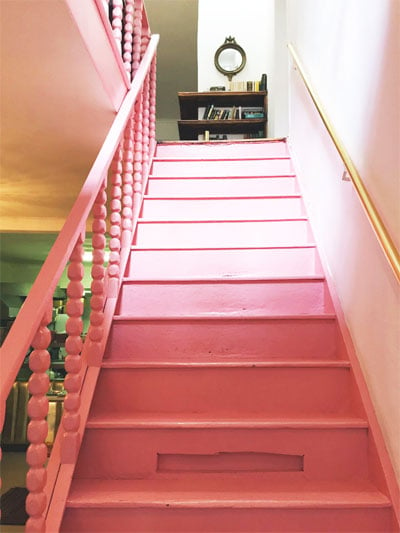 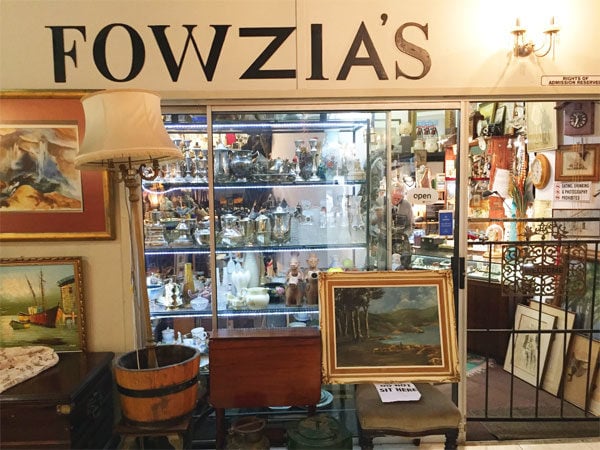 One of the shops in the Long Street Antique Arcade is Fowzia’s; it is particularly well known for its vintage watches, cameras, coins, silverware, jewellery, toys, stamps, militaria, postcards and other collectables. The management there is friendly and engaging, and the visitor must be equally so to appreciate the wide range of items on display – https://www.theantiquearcade.co.za/fowzias/. 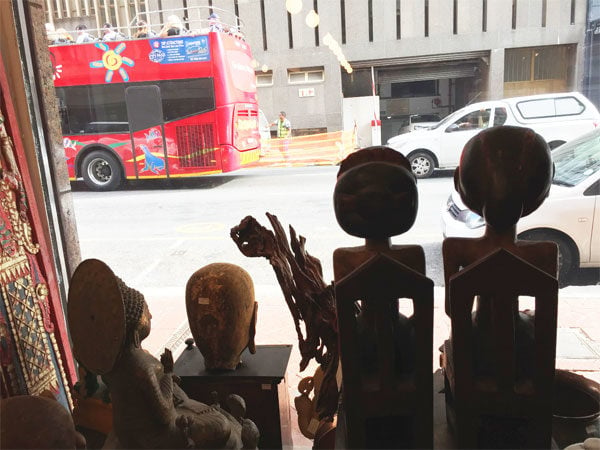 Some of the shops also deal in African art, although for a more specialised experience of this, the visitor would need to go down Long Street (the sea side). However, on the morning that I was wandering around the Church Street / Long Street Arcade, I found that in some of the outlets, there was definitely some African art to buy.

However, the Church Street Mall still has some stalls for visitors to buy collectables, although there are fewer now than there used to be. Some of the antique shops on the mall have open-air outlets, and so the visitor should look out for them and go in and have a look. 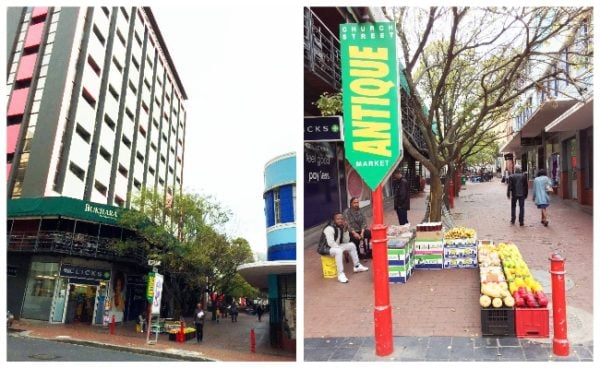 Left: The building housing Bukhara and Haiku (see below) and the chain store Clicks (where the visitor can acquire assistance from a pharmacist and buy items such as toiletries, etc). Right: The entrance to the Church Street Mall from the Burg Street side

The visitor to this area will also be able to choose from two exceptional Cape Town restaurants, one serving North Indian cuisine, called Bukhara, and the other serving Chinese, Japanese and Vietnamese tapas, called Haiku. Information about these restaurants will be referred to elsewhere in this article.

Neither is the area around the Church Street Mall without its current historic importance. This is evident in the Purple Shall Govern Heritage Project, for which there is a plaque at the entrance to the mall. On 2 September 1989, as protesters were marching to Parliament to voice their opposition to apartheid, the police retaliated with batons, tear gas and a water cannon spraying purple dye to stain demonstrators, which would make the task of identification easier, to detain demonstrators.

One of the great moments of irony came when Philip Ivey, a 25-year-old member of the group demonstrating, climbed onto the armoured vehicle and turned the jet of purple dye onto the police themselves. The stain also reached the buildings of the National Party, responsible for implementing the policies of apartheid. This event led to graffiti in the area reading: “The Purple Shall Govern.” Eleven days later, 30 000 protesters marched peacefully through the city; it was the era of the end of outlawed marches, and South Africa’s political landscape was fast changing. Any charges against Ivey were withdrawn. Below: The memorial – “The Purple Shall Govern.” (Information for the above vignette on this historical event is from http://sthp.saha.org.za/memorial/articles/the_day_the_purple_governed.htm.) 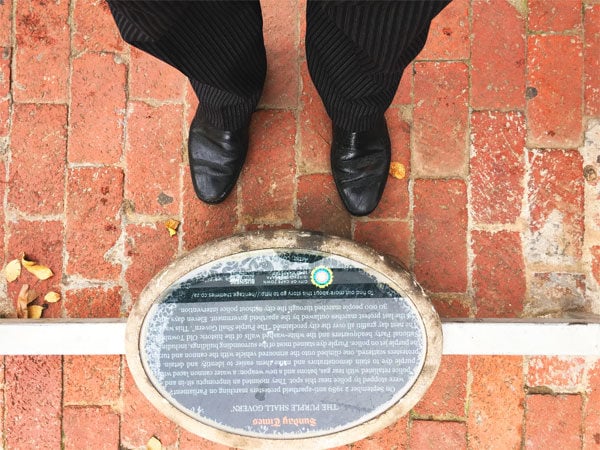 The “Purple Shall Govern” memorial is at the entrance of the Church Street Mall. The plaque faces where the event took place on 2 September 1989. 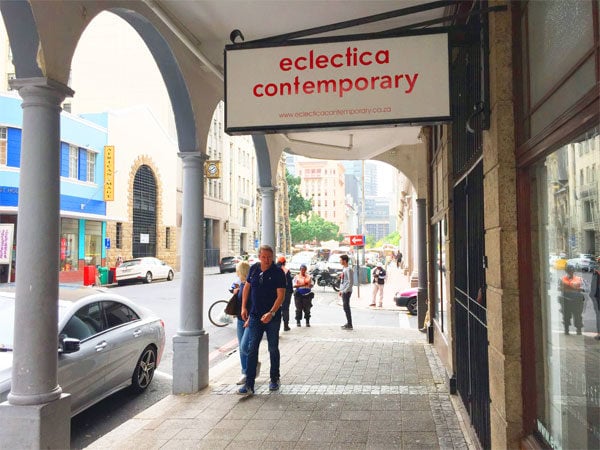 Electica Contemporary Art Gallery – situated at the intersection where the purple dye was sprayed from cannons on protesters on 2 September 1989 – hosts an incredible selection of local and contemporary art. One of the works, entitled “Veiled II”, by Vincent Osemwegie, resembles Bantu Stephen Biko, the founder of the Black Consciousness Movement in South Africa through the establishment in 1968 of the South African Students’ Organisation (SASO). Given the position of the gallery and the strong fibre of political history surrounding the site, it remains a possibility. (below). 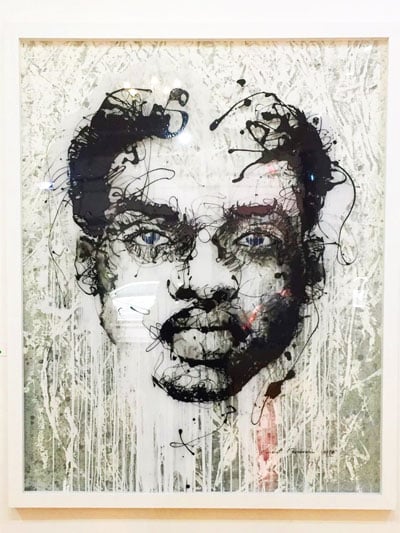 Two important Cape Town restaurants are in the same area in Burg Street: Bukhara serves North Indian dishes; the other, Haiku, is a “smart, traditional spot for Chinese dim sum and stir fry, plus Japanese grills and sushi, tapas-style”. The two come out of the same stable – go to https://www.bukhara.com/haiku/. To get there in the evening, organise transport – taxi or Uber – via the concierge or management of the venue where you are staying. 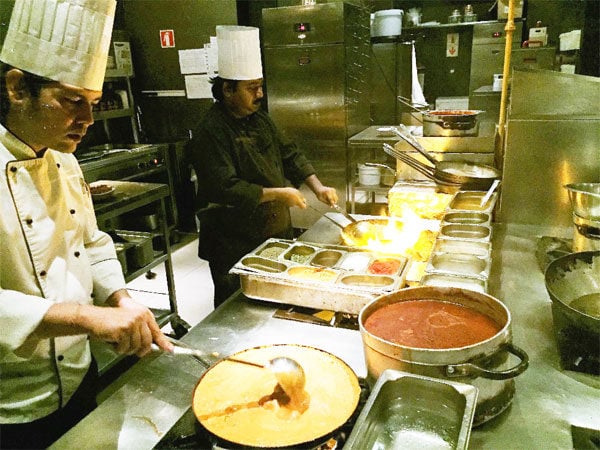 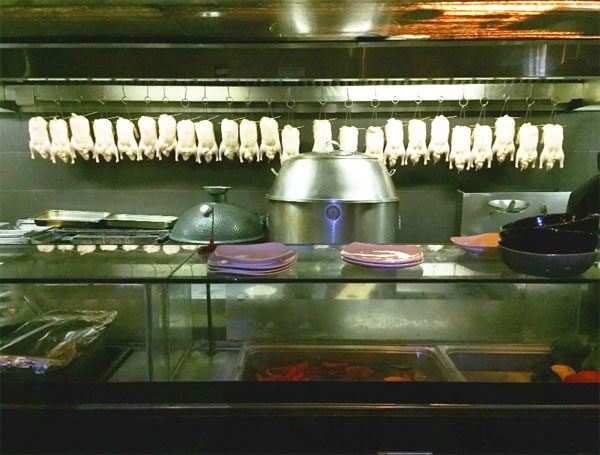 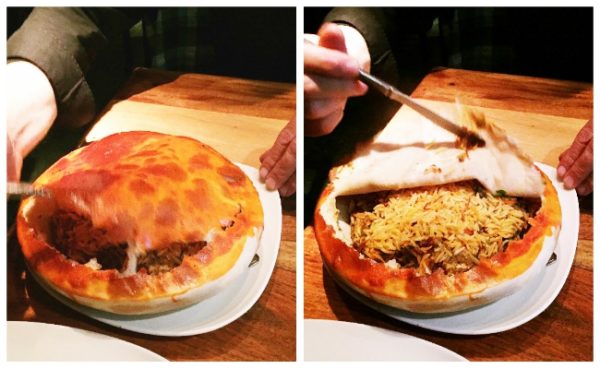 The manager at Bukhara dissecting a chicken biryani dish. It certainly made for a lovely meal of good dining (see below). 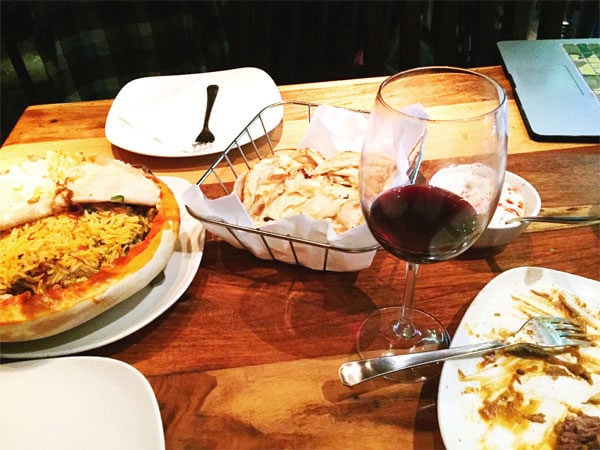 The city of Cape Town has much for the visitor: nice freshly ground coffee, excellent antique shops and a choice of top-range restaurants. This all, year in, year out.