This conference will bring together some of today’s most influential thinkers on African affairs to reflect on the current social, political, religious, economic, and environmental dynamics that characterize the continent.

Independence from colonial rule (around 1960), to many, was a turning point in African history – but what has changed, and what has persisted? What have been the drivers of stability and transformation? And how do we interpret the outcomes of these processes, for example in terms of the Sustainable Development Goals or the continent’s relationship with climate change? We challenge each of the speakers to reflect on Africa’s recent past and current state of affairs through the lens of their own discipline and expertise. 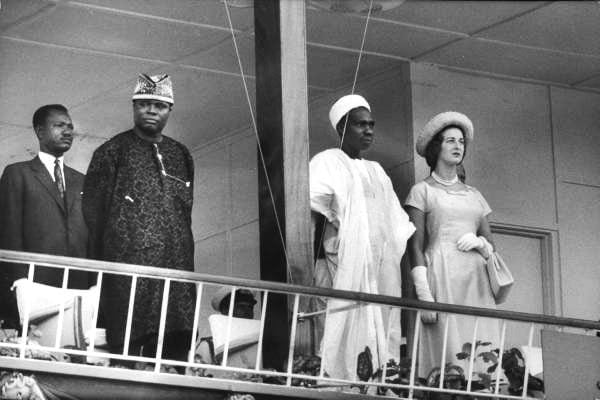 Prime Minister Balewa and Princess Alexandra of Kent on the right, and Jaja Wachuku, First indigenous Speaker of the Nigerian House of Representatives on the left (capped). (Photo: Lord777 [CC BY-SA 3.0], via Wikimedia Commons)

The conference is organized in the framework of Africa 2020, hosted by LeidenASA, the assembled Africanists from Leiden University with partners from TU Delft and Erasmus University (and others) to mark the year in which 17 countries on the African continent will celebrate 60 years of independence.

Lungisile Ntsebeza
Professor and the holder of the AC Jordan Chair in African Studies at the University of Cape Town. He is also the holder of the National Research Foundation (NRF) Chair in Land Reform and Democracy in South Africa. He has conducted research on the land question in South Africa around themes such as land rights, democratisation, rural local government, traditional authorities and land, and agrarian movements.

Birgit Meyer
Professor of Religious Studies, Utrecht University. A cultural anthropologist working on lived religion in Ghana, Birgit Meyer studies religion from a global and post-secular perspective. She focuses on the rise and popularity of global Pentecostalism; religion, popular culture and heritage; religion and media; religion and the public sphere; religious visual culture, the senses and aesthetics.

Carolyn Hamilton
National Research Foundation Chair in Archive and Public Culture at the University of Cape Town. Hamilton is an anthropologist and historian specialised in the history and uses of archives. She was a professor of anthropology at the University of Witwatersrand and a member of the board of the South African History Archive and the inaugural Council of Robben Island. She was a founder member of the Gay and Lesbian Archive. She is a former speech-writer for Nelson Mandela and joined the Nelson Mandela Foundation’s board of trustees in 2015.

Jan Abbink
Professor of Politics and Governance in Africa, African Studies Centre Leiden, Leiden University. Jan Abbink is an anthropologist and historian who carries out research on the history and cultures of the Horn of Africa (Northeast Africa). His expertise on Ethiopia is recognised worldwide. In his lecture Prof. Abbink will zoom in on the changes in Sudan and Ethiopia, where new political movements and leaders give hope for renewal and prospects for the future.