There is little doubt that South Africans are desperately in need of good news stories. We are overwhelmed by news, opinions, social media posts, braai conversations and Protea batting collapses that remind us that the rainbow nation has fallen apart, that there are many things very rotten in the state we live in.

No wonder then, that the Facebook group, #ImStaying, has garnered such incredible membership in such a short space of time. In just over a month since its launch on 7 September, it has gained more than 629,800 members – including more than 600 of my Facebook friends! – expressing their support for a group that is “unashamedly positive, focuses on good news stories, shares moments of interracial happiness, of working together and laughs (with good humour) at our differences”. 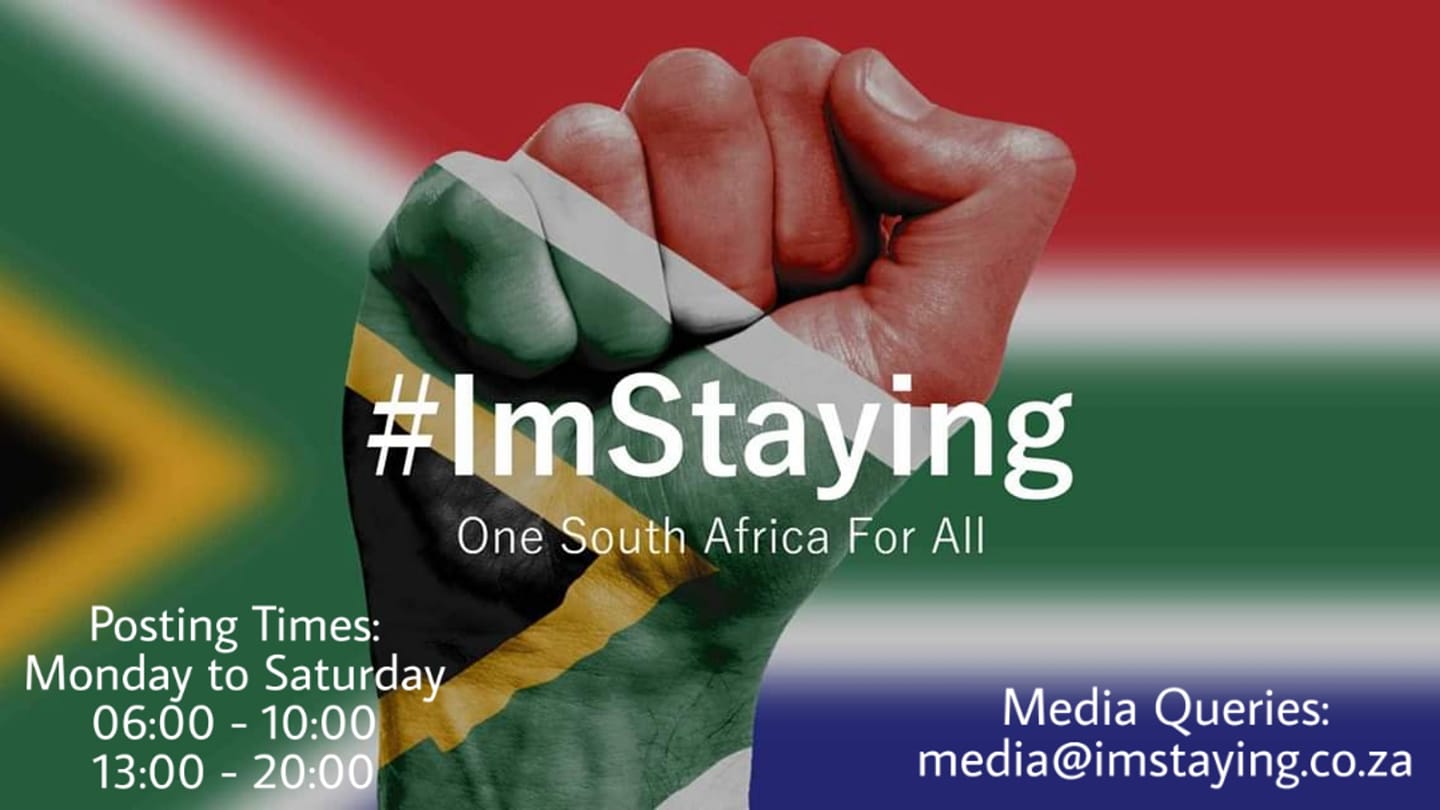 As one supporter states: “If you are sick and tired of the constant negative bombardment about South Africa on the news and social media; on the social media platforms that ‘encourage’ racial division and deep seated hatred, on the corruption and self-servicing political agendas; and if you wonder who will fix this country and restore its human dignity, visit this platform. It is here that you will find a grassroots movement of people who are tired of negativity and who are going to make the positive changes our beloved country so dearly needs.”

The group – initiated by Jarette Petzer – describes itself as one that is “dedicated to South African women and men of all races, cultures, religions and creeds who remain loyal to South Africa. This group is to honour all those who still believe that we as a nation can turn things around. We focus on the people, beauty and the positive in South Africa and all the good vibes. To all those who choose to stay and work as one to save this beautiful country we all call home. This group belongs to all those willing to make a positive difference. Good thoughts. Good words. Good deeds.”

The rules for participation are strict. “No negativity, no racism, no gender bias, no advertising. Post any vitriol and you will be blocked.”

As with all such initiatives, there are the critics, the cynics, the countervailers and the downright, well, negative.

Other Facebook groups have started in response. There’s #ImStayingtoobut that wants to go beyond the feel-good vibes, to talk about the issues that need to be addressed in order to change the country. Another group @ImNotStaying started on 30 September but has attracted only 33 likes in more than ten days. And then there’s #AmIStaying for the more conflicted “Fight or Flight” types, with its over 4000 members who want to have “honest conversations”.

There are at least four reasons for people signing up to #ImStaying.

First, there are those with a genuine desire and commitment to make a difference, however small, in their own way.

Then there are those for whom the benefits of staying – family ties, business, quality of life – outweigh the downside at this point and the disruption to their lives that moving would entail.

A third group would be those who assert that this is their country with a kind of bloodymindedness that come hell or high water, they are not leaving; no-one will force them away from here and they will fight to the bitter end for what they have.

Perhaps an overwhelming reason for many staying though is a combination of not having anywhere else to go, and not having the means to go. They’re stuck here, so they may as well make it work.

And it is probably the reality of the latter for most South Africans who live in poverty and who can barely afford to travel within their own country, let alone leave, that raises the key criticism of the #ImStaying group i.e. that it is a statement of privilege, that it is people with options, probably many of whom have two passports, who are able to assert that they are staying, precisely because they have the option to leave.

But then, what does it help to point out that people are privileged? We know this to be the case. The challenge is about how people use their privilege to change our society for the better and for the benefit of all.

And this will be the key test for the group: whether it can go beyond the feel-good, multi-racial, middle class, happy clappy rainbow nation rugby moments that unite momentarily, with everyone departing to, or staying in their divided realities afterwards, and contribute to the fundamental and structural changes that the country really needs in order build an inclusive society.

Citizen-led initiatives that seek to bring people together to contribute to a better society need to be applauded; the challenge is how to translate a social media group into a force for impactful change.