Stellenbosch has so many different things to offer the tourist, and this article looks at some history, the buildings and some delicious food.

As a residential town, Stellenbosch was established in 1679 by the governor of the Cape Colony, Simon van der Stel, who decided to name it after himself, hence Stellenbosch. It is not proposed for this article to relate the detailed or specific history of the town, as this is available on many websites on the internet, such as Stellenbosch.co.za and plenty of others.

The idea is to provide the tourist, the visitor and, probably in some cases, too, the resident with some unusual details about a trail into this town that he might follow. While there are several routes into the town itself from all directions, such as the classic Dorp Street (the old wagon road to Cape Town), one in particular is Plein Street. This gives a good feel of the “Town of Oaks” – for, one of its lasting features has been the “beautiful, shady and gnarled old oak trees” (a description of them in summer); in winter, they are bare and leafless to the bone, yet still mightily attractive in their state of solitude.

The following is a poem that describes the love that remains even on a winter’s day (and through the winter’s day), appropriate for lovers walking down Plein Street on a freezing Boland day in Stellenbosch. It is written by one of the country’s most profound poets, NP van Wyk Louw, and is entitled “Winterbome”[i] (freely translated here by the writer of this article).

The thought of you, of you alone,
engrained on my mind
as shadows under trees
left behind
just you, just you.

Along so many paths, my woes
in my heart, blinded
to all things, and confused.

But this one thing – always
one thing and on its own
grounded and deep-rooted – its relief
though naked in me, through a winter’s day
this love, this love.

Plein Street introduces the visitor to a host of incredible surprises.

Start off further down, at Die Braak / The Braak, once also known as Queen Square (when Her Royal Highness Queen Victoria was the monarch) and then King’s Square (after her successor and heir, HRH Edward VII). Apart from several uses other than its role as the town square from the 1700s, The Braak was used for playing cricket – in 1888, a cricket match against the MCC (the Marylebone Cricket Club from England) was played there. In winter months, rugby matches were played there, too, as the space was easily big enough to accommodate this typically South African sport.

Today, The Braak remains an important historical space for the town, especially considering the current demands on land and expanding business spaces in the middle of towns/cities; and, today, there are stalls lining it, where local craft can be seen and bought.

The only building to occupy The Braak today is St Mary’s Anglican Church. 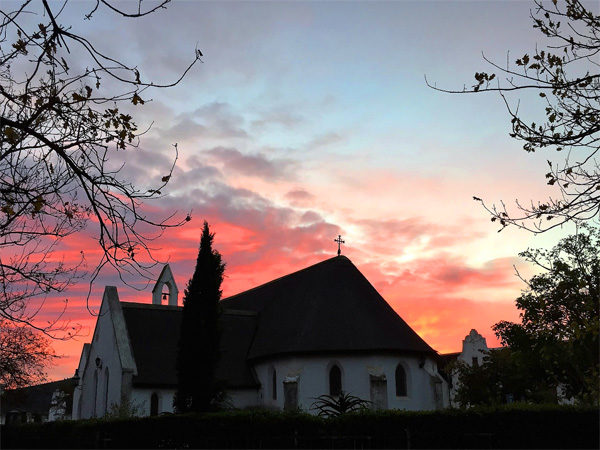 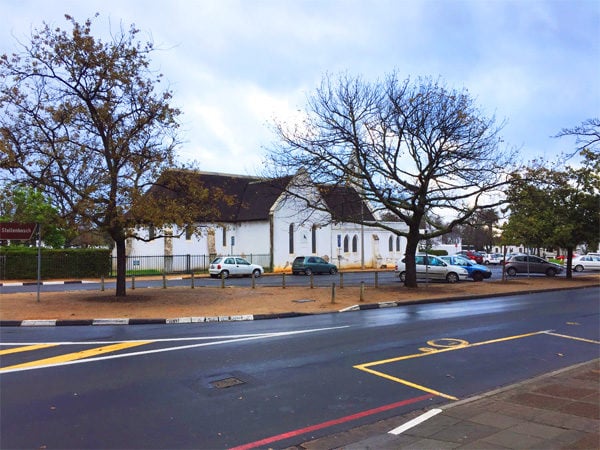 The two photographs above: St Mary’s on The Braak; in 1854, the first bishop of Cape Town, Bishop Robert Gray, consecrated this church. It was built by W Martin after a design by Peter Penketh. On the morning of Sunday 1 July 2018, Reverend Henry Mbaya delivered a beautiful homily contextualising the gospel of St Mark at the 7:30 am service attended by the writer. The morning was a historical experience for him, as he recalled attending services there and, in fact, reading from the lectern, when he was a student in Stellenbosch in the seventies. Since he had come from a Boland town not far away, Stellenbosch, however, was a true “university” for him, as for thousands and thousands of other students, both then and still today. 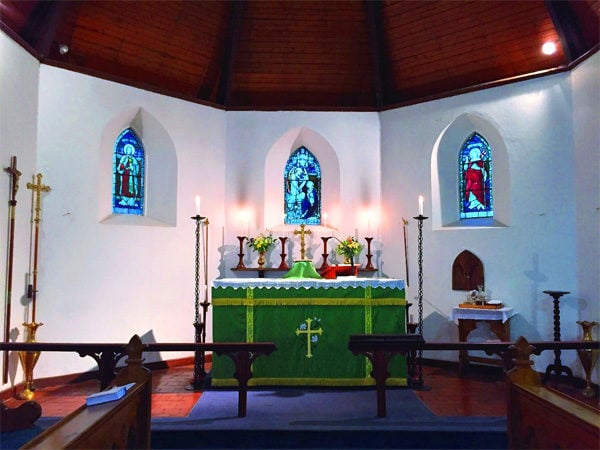 The apse of St Mary’s on The Braak

From The Braak, proceed up Plein Street, lined by street cafés and shops. This street gets its name from beplante plein, meaning a square lined with trees. Where Drostdy Street is (higher up, where Plein Street meets Van Riebeeck), there was this beplante plein, and somehow the name was transferred. The Drostdy will be discussed in the next article; it is described as the residence of the town’s magistrate. Stellenbosch no longer has its Drostdy – rather, where it once stood is where the theological seminary is.

Walking further up Plein Street, pass the town hall on the left, a massive structure with its facade in the style of a classic pediment with Doric columns. Opposite is the newly opened Doppio Zero. 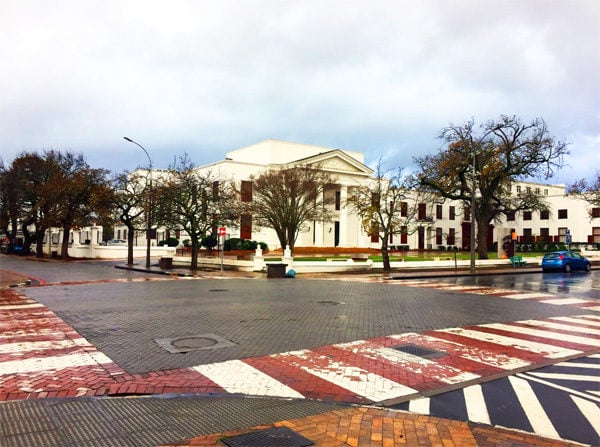 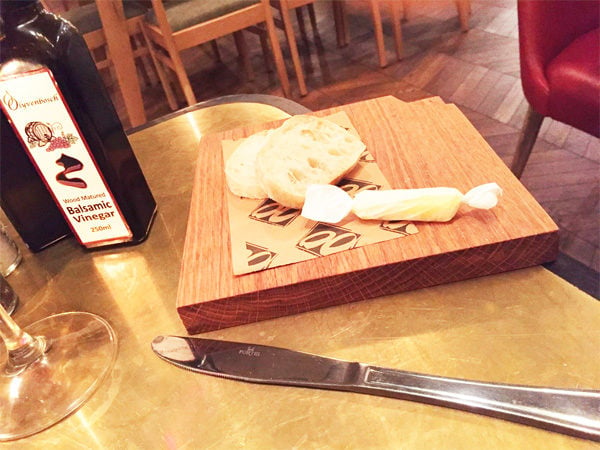 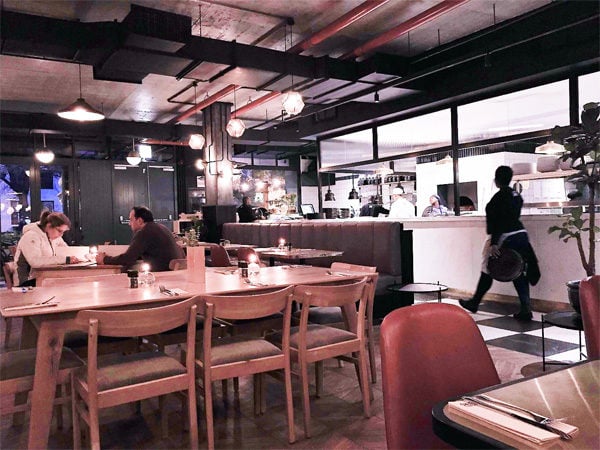 Inside Doppio Zero: vibey and really great choices from the menu – and very friendly staff and hands-on management 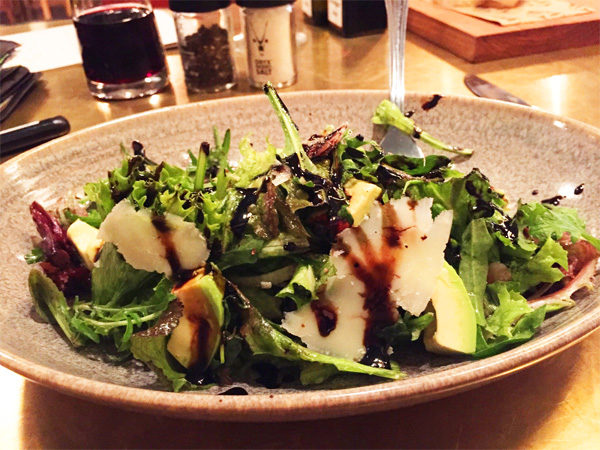 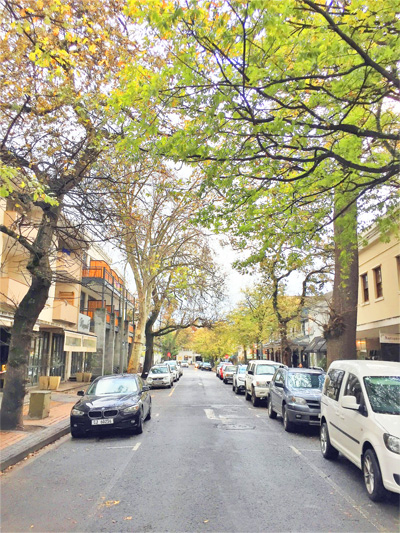 Photograph above: In 1968, the oak trees along several streets of the central heritage district of Stellenbosch were proclaimed national monuments – one such street was Andringa Street. In the photograph, one sees some of the oaks, although other species of trees, such as elms, are also clearly visible. However, Stellenbosch has become known as the “City of Oaks”.

Another interesting street with lots of history is the next one to the right, as one proceeds further up, walking up Plein Street – this is Ryneveld Street. Important sights await the tourist in this street. Number 18 Ryneveld Street is the Stellenbosch Museum, itself a national monument. It’s much more than just a single space housing one museum, as there are four lovely restored historical homes making it up – Schreuderhuis, Blettermanhuis, OM Berghuis and Grosvenor House. The Schreuder House is the oldest known existing dwelling from that time, built in 1709. 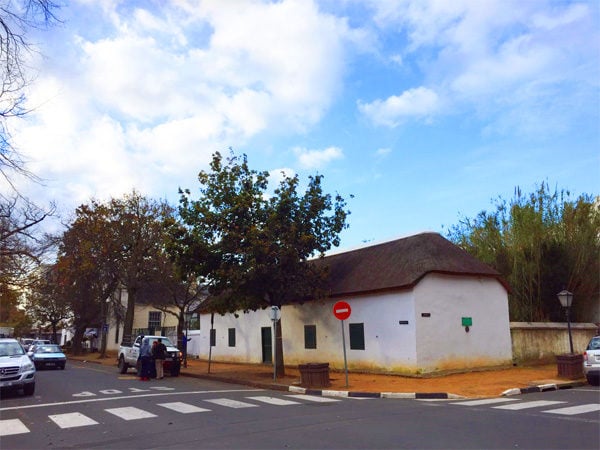 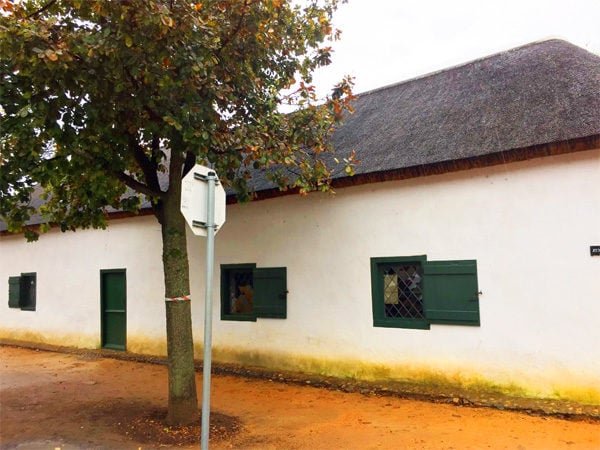 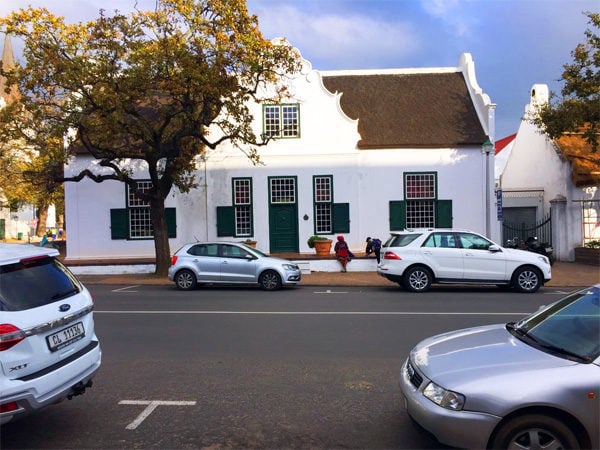 Photograph above: Bletterman House, a classic example of Cape Dutch colonial architecture in Stellenbosch. Two further important sites are there to see: go into Drostdy Street, and first visit Grosvenor House and then the OM Bergh House (visit here for further details).

Reaching the place where Plein Street finally becomes Van Riebeeck Street, and turning right, you enter Drostdy Street, in which is the Moederkerk (the Mother Church), altered into its current neo-Gothic style by the architect Carl Otto Hager of Dresden, Germany, and consecrated on 31 October 1863. Its presence at the top end of Church Street makes it one of the town’s most imposing edifices. 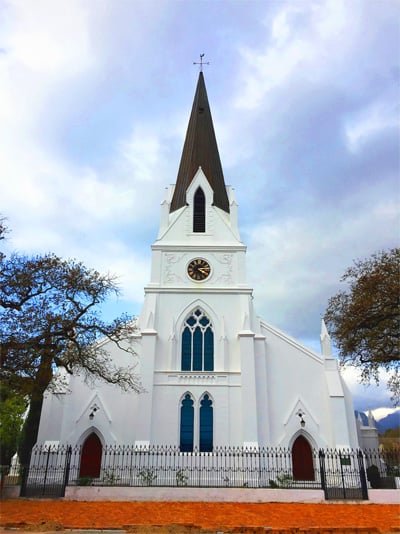 The Moederkerk in Stellenbosch, built in neo-Gothic style (for further details and images, read here). 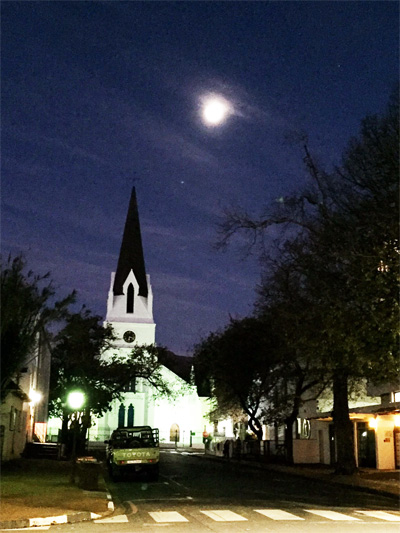 Walking through Stellenbosch at night with its beautiful buildings can give an almost Van Gogh feel to them – the Moederkerk on a winter’s night with the moon rising.

Where Plein Street ends, Van Riebeeck Street begins. Certainly a very impressive building as one proceeds up Van Riebeeck Street, number 10 on the left is the South African Conservatorium of Music, the first conservatory in South Africa, established in 1905 with Prof FW Jannasch as director. This double-storey building is built in an interesting mixture of architectural styles. 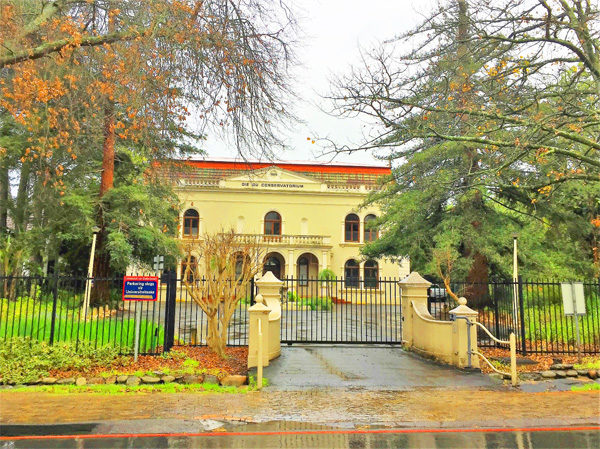 The “old conserve” – the writer recalls attending concerts here in the early 1970s. Today, there is the “new conserve”, where annual music festivals are held.

With a great deal of sightseeing behind the visitor, it should now be time for a rest and some comestibles and replenishment. Right there at the junction of Plein, Drostdy and Van Riebeeck Streets is one of the town’s landmarks for eating – the Decameron, named after Giovanni Boccaccio’s classic stories. The current proprietor of the Decameron, a former expert technician in the manufacture of steel tanks for distilleries, Mario Ladù, once frequented the well known Enrico’s, which was a classic Italian trattoria in Ryneveld Street, where the Stellenbosch Museum stands today.

Enrico’s got its name from Enrico Milani, who came to South Africa from Rome in the 1950s and worked in restaurants in Johannesburg until he came to Stellenbosch, where he opened Enrico’s. He lived here with his family, Marlene and children Tina, Letizia, Gianna and Cesare. Few today would remember this special Stellenbosch eatery, at the time a definite landmark – with classic Italian food! Tragically, Enrico died quite young in 1978, and the writer of this article recalls, at the request of his widow, Marlene, transporting his cremated, consecrated ashes to his family in Rome, where the final procession of the cremated body of Enrico Milani led to him being immured in the Milani family’s columbarium. 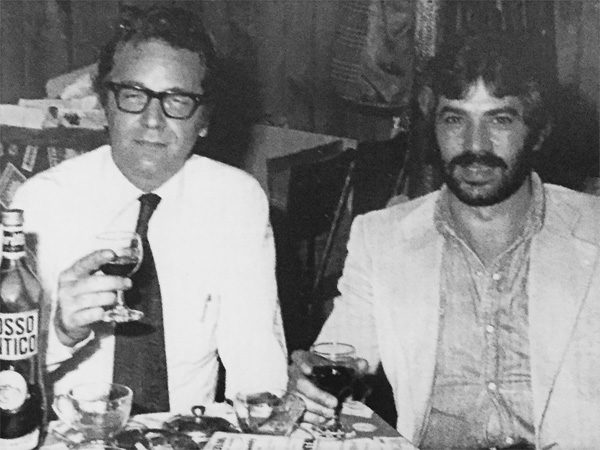 Reconstructed photograph: On the left is the late Enrico Milani, and on the right, the current proprietor of the Decameron, (then a young) Mario Ladù. The Decameron is the Italian restaurant at the top end of Plein Street.

Much like Enrico did then, Mario serves classic Italian food. All dishes are freshly prepared from fresh produce. He takes great pride in doing so, and will happily explain his methods and menus to his patrons. 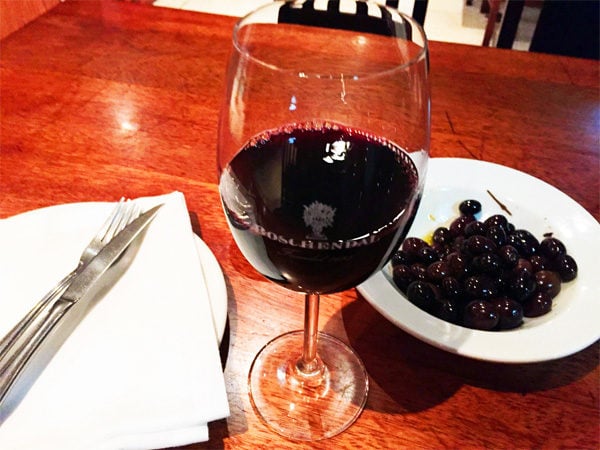 An antipasto and claret with home-made olives, served at the Decameron 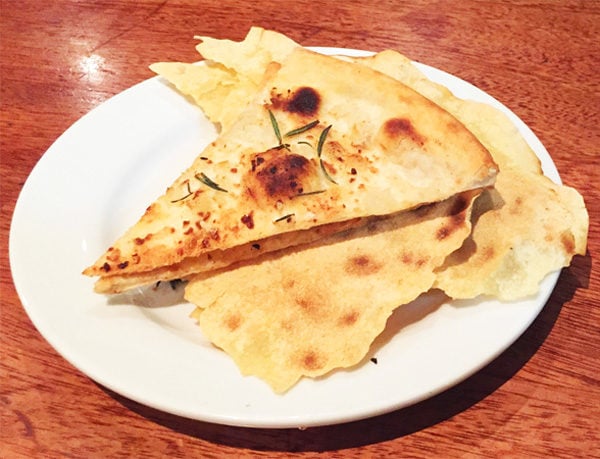 A hallmark, the focaccia – flat wood-oven-baked bread, similar to the base of pizza 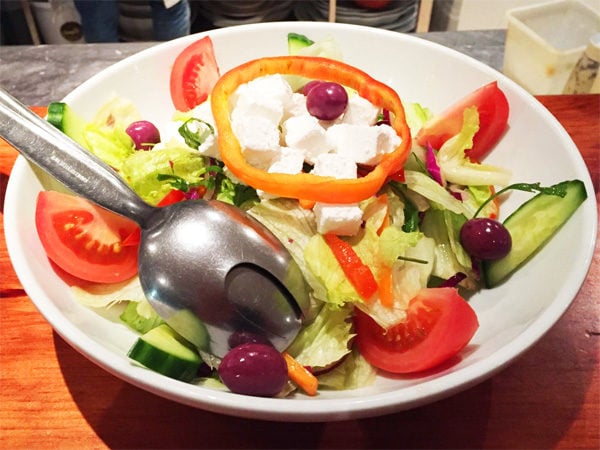 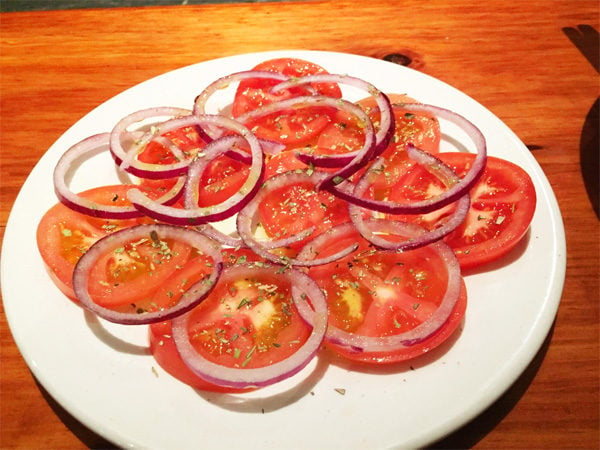 Only fresh products are used at the Decameron – insalata mista / tomato and onion. 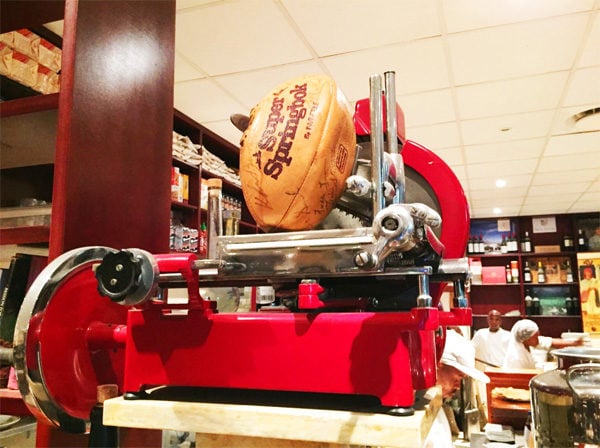 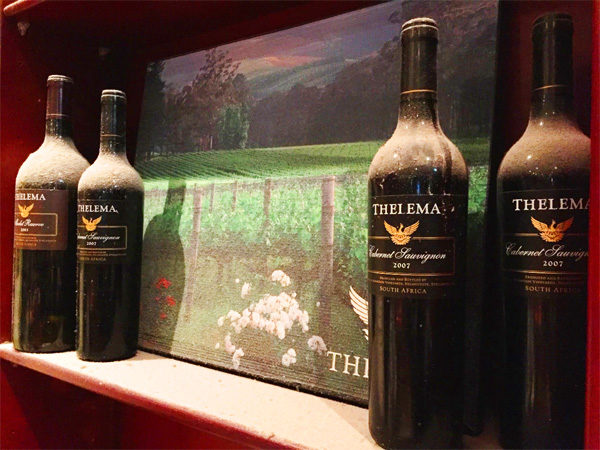 Photographs above: The Decameron is in the heart of South African rugby, with Coetzenburg just around the corner. This is next to Stellenbosch school Paul Roos, which can claim close to 50 Springbok rugby players. Some of them can still be seen coming to eat at the Decameron, hence the trophy – many other trophies are in the wine that they make, some bottles left to mature, in the true sense of the word. 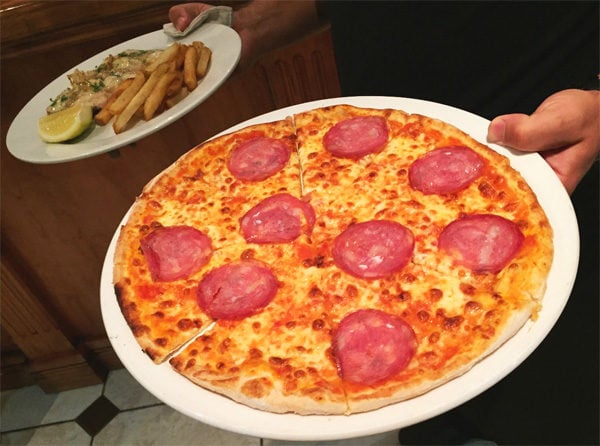 The Decameron produces fresh crisp-based pizza. Check out the menu! 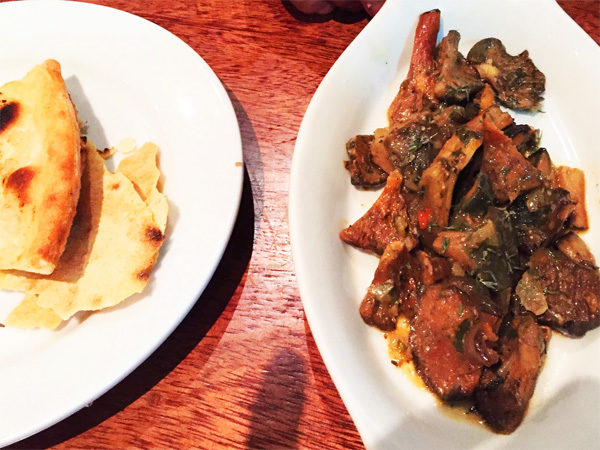 Specially prepared mushrooms in season – these were “fielded” by Mario himself. His love for them derives from his home in Sardinia, where from a young age the children went out mushrooming. 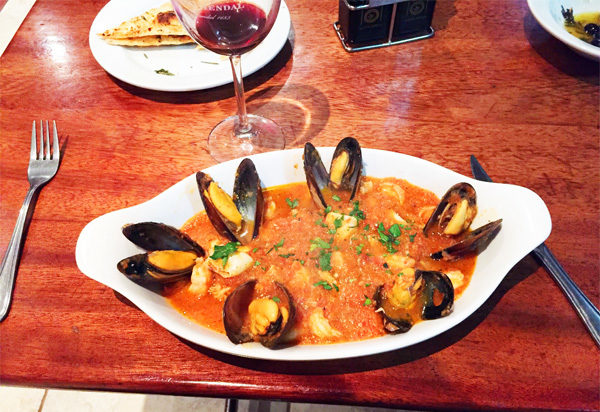 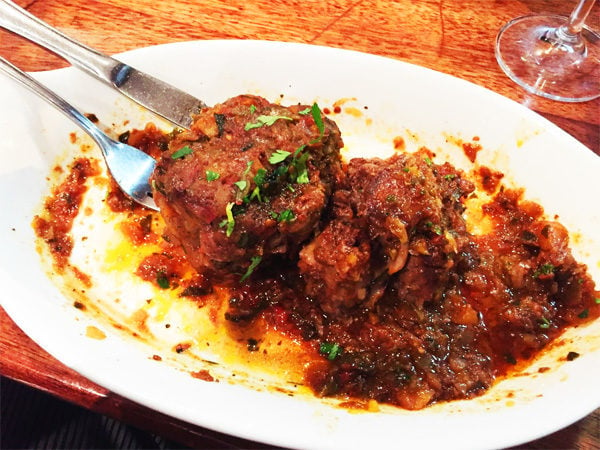 Fresh oxtail – this dish was made specially on request! Now, it appears on the winter menu.

- Read here for details about the Decameron.

- The route up Plein Street has a good choice of street food, bistros and other restaurants.

- For some of the other restaurants in Stellenbosch, especially some of the new ones, visit here.

- One of the classics is the Wijnhuis – but reviews of the restaurants from the Wijnhuis stable, including La Perla in Sea Point (Cape Town), will feature later this year on Voertaal. Meanwhile, for the Stellenbosch Wijnhuis, visit their website.

- In the next article by the writer, some of Stellenbosch’s art sites and the art scene will feature – sightseeing, art, its buildings, history and food – a deadly combination: Stellenbosch has it all.