To mark the 2020 International Day Against Homophobia, Transphobia and Biphobia (IDAHOT) on 17 May, photographs taken by Neo Ntsoma, featuring transgender model and activist Yaya Mavundla wearing the Amsterdam Rainbow Dress, will be donated by the Dutch Embassy to the Constitutional Court Trust (CCT), custodian of the Constitutional Court Art Collection (CCAC).

In December 2018, the CCT entered into a partnership with the Embassy of the Kingdom of the Netherlands in South Africa to present and photograph the Amsterdam Rainbow Dress at the Constitutional Court, with the assistance of students of the Market Photo Workshop.

The dress was shown for the first time in Africa thanks to the Dutch Embassy’s efforts.

The Amsterdam Rainbow Dress is a work of art made from the flags of all countries in the world where homosexuality is illegal, which is changed to a rainbow flag when such legislation is changed. 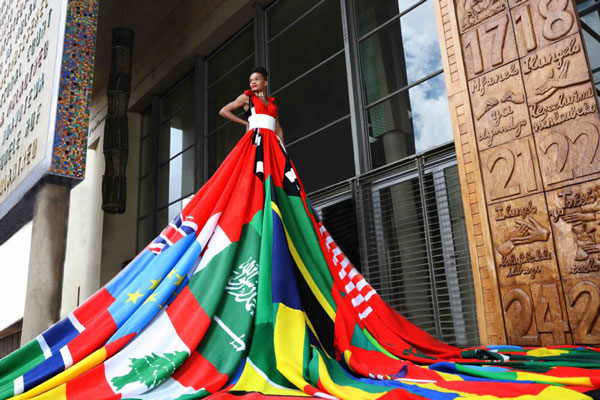 It aims to create awareness of the persecution of LGBTIQ+ people, and is a powerful example of how art can be used to champion the cause of justice and humanity. Our Constitution guarantees dignity and equality and outlaws persecution of sexual and gender identities.

South Africa was the first African country to legalise same-sex marriage in 2006.