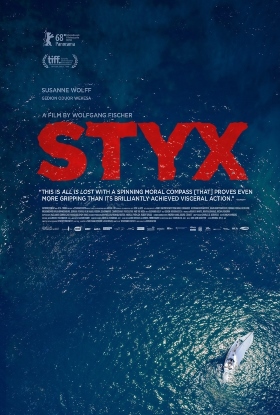 The film Styx focuses on one woman’s inner conflict on doing as you are told and following orders, or doing what you feel is right and risking everything in the name of doing what you deem is “right”, evidently putting your own life in danger.

Styx tells the story of German doctor Rike (Susanne Wolff) who is a seasoned sailor capable of weathering any storm that threatens to slow her down.

One morning, while on a solo yachting expedition, she sees a sinking boat carrying dozens of refugees on the horizon. She can see the distress of the people on the sinking vessel, knowing they are scared to death that they will drown. Wanting to help them, she knows it would pose an impossible task for her because of the fact that her boat is not big enough to save everyone and she might end up putting her own life in danger in trying to rescue anyone.

Rike finds herself in an impossible position between following the orders of the coastguard, who urges her to stay out of the matter except for reporting on it and keeping them informed, and her sense of empathy upon seeing so many people on the sinking boat knowing that they might not survive if no one intervenes in time.

Styx is a 2018 German-Austrian drama film directed by Wolfgang Fischer, written by Ika Künzel and Fischer. The film’s title is named after the mythological Styx River that flows between the living and the dead.

The film introduces us to Rike who is about to take a well-deserved vacation from her very demanding job, and sets off on a solo trip on her yacht, Asa Gray, from Gibraltar. This has been one of her lifelong dreams. She is completely alone on the yacht, without any connection to the outside world, except for the boat’s radio. Her destination is Ascension Island, in the middle of the Atlantic Ocean, between Angola and Brazil. We see Rike skilfully managing the yacht and enjoying her trip while stopping for breaks to swim and read up on Darwin’s time on Ascension Island.

The film, however takes a scary turn when Rike finds herself off of the coast of Mauritania, where she has to weather a storm. The yacht is viciously tossed around by the monster waves and rain is falling as Rike tries everything to keep the yacht afloat. One feels for her, as she is completely alone and can rely only on herself to stay alive. This storm, however, is just the beginning of the drama. Rike survives the storm and manages to stay afloat. 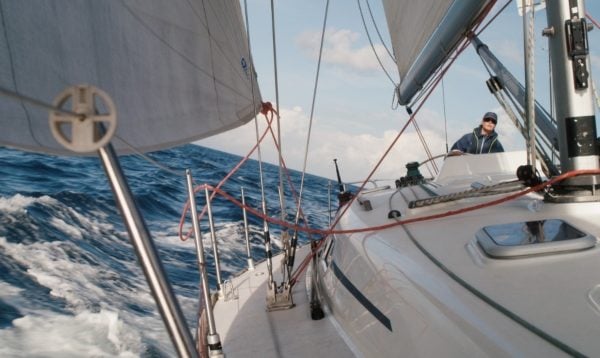 The next morning the ocean is calm again, when Rike finds herself just several hundred metres away from a sinking boat filled with refugees, who are all calling out for help as their ship is sinking and they can’t do anything about it. Rike alerts the coastguard about the sinking vessel and the coastguard promises to send a rescue mission, although nothing happens for hours.

She wants to help, but she knows getting closer would cause a panic. She knows if she goes over to try to help them, they might flood her yacht as they are too many to help. This would then compromise her own safety. Her own boat’s constant creaking is a sure reminder of the fact that it cannot carry everyone.

Eventually several of the refugees jump overboard and one of them, a boy called Kingsley (Gedion Oduor Weseka), in his early teens, manages to swim to Rike’s boat, and she helps him on to it. The boy is exhausted and tells her his sister is still on the sinking boat and doesn’t understand why Rike won’t come closer to help them.

This ultimately poses a moral dilemma on Rike, who feels compelled to try to save the people on the sinking boat, including Kingsley’s sister, but also knowing her own limitations, realising that one person cannot help these more than 100 people. This ultimately means that she has to sit back and watch the action play out in front of her eyes, while she waits for help, being reduced to a mere impotent witness. 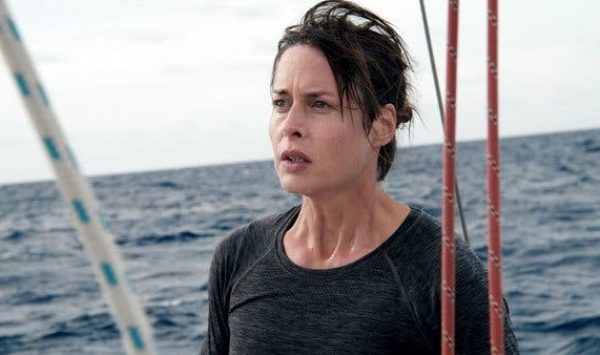 What stands out in this film is its minimalistic and unsentimental approach. There are no gimmicks in the film – it is just Rike, her boat and the action taking place on the sinking vessel with the refugees. There is not even a lot of talking in the film, the only action being Rike’s moving around on the yacht and her occasional radio exchange with the coastal guard.

Wolff basically carries the whole film, as she portrays Rike as lead character with no other characters except the refugee boy around. Wolff carries herself well, showing she is capable of portraying a role where there is minimal dialogue and the majority of the storyline is told through action and not words. It is this element of the film that makes it that much more gripping and uncomfortable to watch, since there is nothing to divert the viewer’s attention from the action position Rike finds herself in. 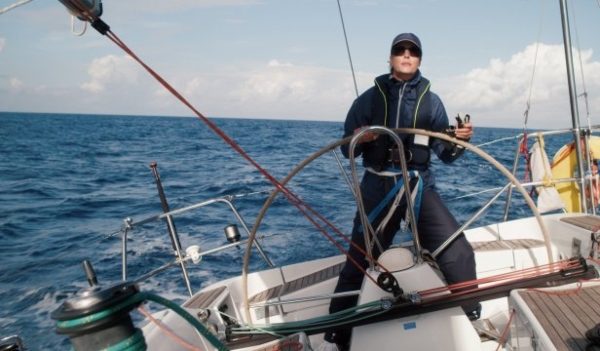 However, it becomes difficult to look away when these “faceless” refugees suddenly turns into individuals like Kingsley, and one realises that they are human beings in their own right. Humans with lives, fears, hopes and dreams just like everyone else. Director Fischer and co-writer Künzel tried to bring this point across, emphasising the West’s ambivalence towards the refugee crisis.

Sometimes it is easy to make “logical” decisions, as the coast guard did, when one is not confronted directly with the problem at hand, but when one is Rike, it becomes difficult to turn a blind eye. The film shows us that we, too, often become inhumane and lose our compassion for our fellow man.