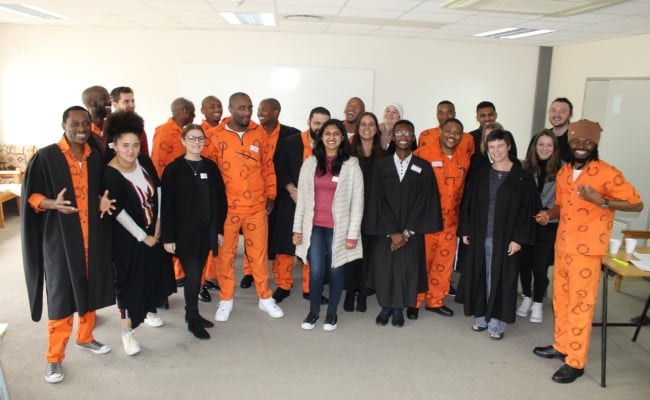 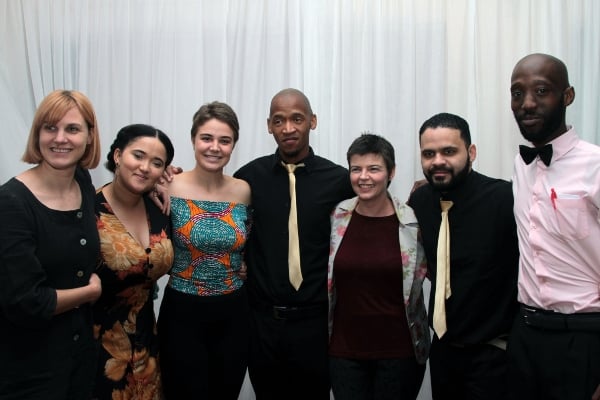 The Ubuntu Learning short course is a Stellenbosch University-accredited interdisciplinary short course whereby students from the university and students from Brandvlei prison in Worcester studied together in Brandvlei over 14 sessions of three hours each, plus an End of Course celebration. The short course theme (chosen in collaboration with the students after a brainstorming session last year) was: “Am I because we are? Exploring selves and communities” – a theme which was explored from the perspectives of history, economics, literature and law.

The reason for making the course interdisciplinary was to demonstrate – in what we learned, as well as in how we learned it – the value of perspectives of those from different backgrounds and life experiences. Interdisciplinarity makes educational collaboration crucial, since no one participant, whether academic or student, is an expert on every aspect of the theme. Everyone therefore starts the educational encounter from a place of humility. No one is portrayed as more powerful, or as the possessor of knowledge who benevolently dispense it to less able recipients.

A variety of perspectives on a single theme also emphasises that there is no one “right” way to think or engage with the world and that nobody has the monopoly on knowledge and knowing: There are many different equally valid ways of knowing and understanding, each of which is valid in its own context.

The course is a component of a partnership between the Department of Correctional Services and our initiative, the Ubuntu Learning Community (with Prison to College Pipeline-SA). The other two components entail social support and reintegration for incarcerated participants post-release and (student-led) educating and sensitising of SU students (and the wider community) about the incarceration system.

The Stellenbosch University academics and approximately 15 Stellenbosch students (studying many different courses and ranging from first-year to post-grad) travelled the 75 minutes to Brandvlei prison every Thursday when the course was on to join the approximately 15 Brandvlei students. For this pilot project the Brandvlei students were all part of the UNISA “hub” in Brandvlei, but were also a diverse group as far as what they are studying, age, etc are concerned. Classes were from 10 am to 1 pm.

The classroom model was to prioritise collaborative learning and to give students a space to learn where all voices were heard and respected. Each academic had three three-hour sessions with the students, and a variety of activities and learning experiences were engaged in. These included students writing an autobiography, a biography of another class member and a short story.

They also did social experiments in the economics section, and prepared written arguments for and participated in a mock trial in groups in the law section. Students were expected to do reading related to each discipline and to prepare for and engage in class. The course also had an online component via SUNLearn, where students could keep in touch and participate in academic discussions and other activities between face-to-face sessions. 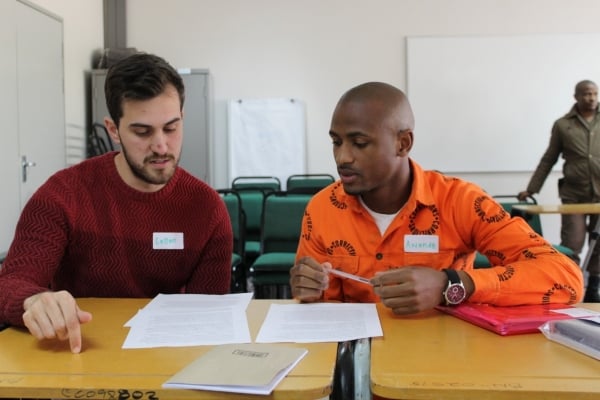 I was inspired to start the wider initiative, the Ubuntu Learning Community, by two overseas initiatives whereby campus students and prison students learn together. The UK initiative is called Learning Together and was started as a collaboration between Cambridge University and a local prison, but has since spread to incorporate many other UK prison-university partnerships.

The US initiative is called Prison-to-College Pipeline. Started at John Jay College of Criminal Justice in New York, it is now a worldwide movement called the Incarceration Nations Network.

The overall aim of the course was to break down the barriers between communities inside and outside prison, and the stereotypes associated with “campus student” and “prisoner”. It provides a rehumanised and safe learning space where students from diverse backgrounds can learn an academically rigorous curriculum together in the spirit of ubuntu.

Having “inside” students and “outside” students learning with and from one another through dialogue and the sharing of experience aims to develop the whole student by focusing on learning’s social, ubuntu-related dimensions: collaboration, community-building and connectedness. 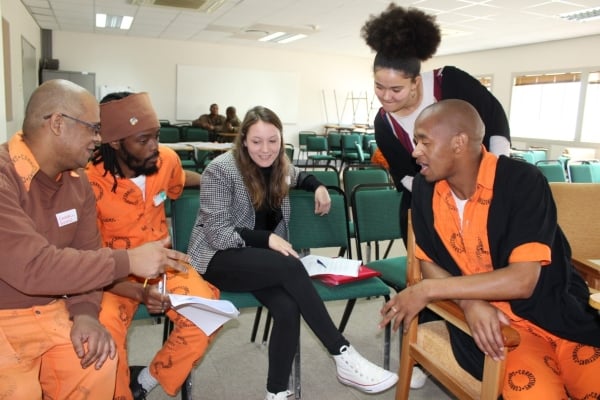 In South Africa many of us have limited opportunities to step out of our comfort zones to engage with and learn from people who have very different backgrounds and life experiences from ours. Because of this we tend to view people outside our established groups as “the Other”, often dehumanising and even demonising them. People we don’t know, we often fear, and sometimes even hate.

Marginalised groups such as foreigners and those behind bars are especially targeted. This ignorance, fear and hate is bad for people inside prison, but is equally bad for those on the outside. Those on the “outside” remain imprisoned by their fear, ignorance and prejudice, unaware of the tremendous potential behind bars and how it may benefit society at large. Stereotypes based on ignorance also prevent individuals released from prison from accessing further education, obtaining employment and transitioning successfully into society to live stable, productive and fulfilling lives.

Even once they are physically free, their future prospects are shackled by the social stigma of having a criminal record and by the perceptions people have of ex-cons. This makes reoffending likely, if not almost inevitable. We need to change the perception of those behind bars.

The course was presented by me, Chet Fransch (history), Debra Shepherd (economics) and Daniel Roux (English).

The classroom environment was wonderful from the start. There were no challenges with having SU and prison students in the same classroom. It took very little time to see past the stereotypes and perceive the commonalities shared by all the students – and how much they could all learn with and from one another. 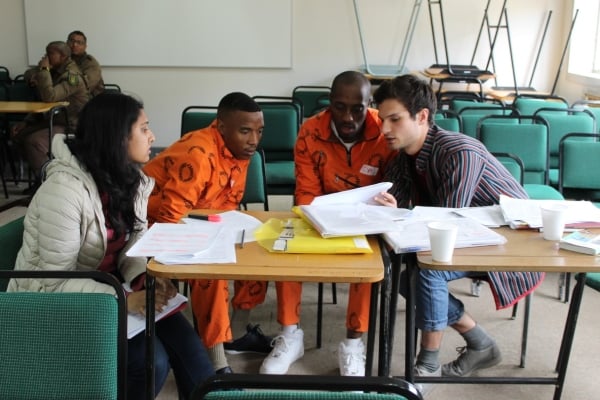 There were logistical challenges related to having class in prison – mostly related to making sure that all the prison students were brought to the classroom venue on time; that the necessary teaching aids (such as projectors, etc) were available; having to buy snacks for each session from the prison tuck shop; that the sessions could carry on for the full allocated time even when the prison staff said they wanted to stop early because a long weekend was coming up, etc. So there was lots of planning and negotiating behind the scenes, especially to make sure that we could hold our End of Course celebration and that all students could invite guests to it.

I learned about the power of education and learning to transcend all boundaries, and to transform and empower those who have access to it. In the words of Paulo Freire, I have seen education as the “practice of freedom, the means by which men and women deal critically and creatively with reality and discover how to participate in the transformation of their world” in action. 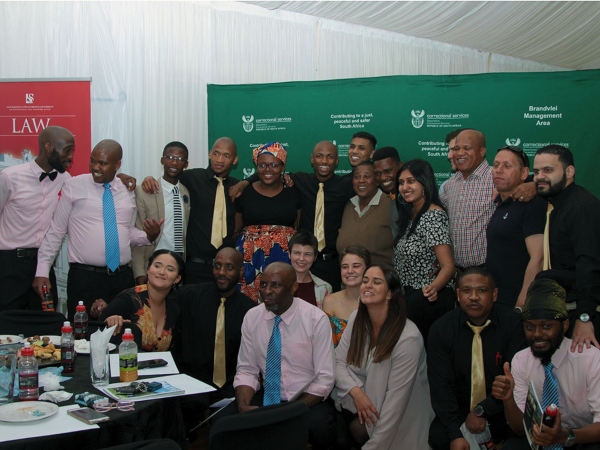 We have received funding to conduct the course again next year. After discussions with the students from this year’s course it was decided to focus on gender and our response to gender-related issues, particularly GBV and the patriarchy. The theme will be, “We are because I am. Changing selves and communities”.

The course will once again be interdisciplinary, although we have not finalised which disciplines will be involved. We want to include a creative arts component if possible. The hope is also to expand to other correctional institutions and to involve other university partnerships too.