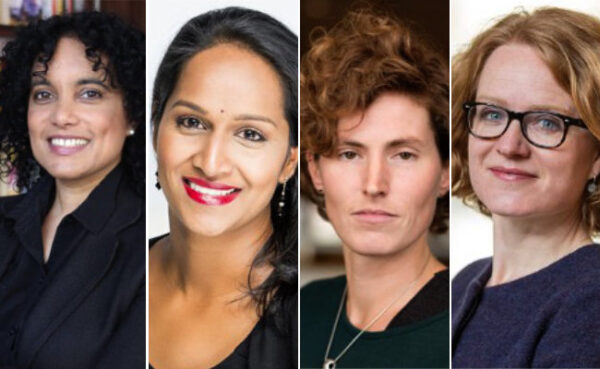 Barbara Boswell is a feminist literary scholar and creative writer with interests in black diasporic women’s writing, black south african women’s literature, and queer theory. She is associate professor at the University of Cape Town.

Reading their fiction as theory, these writers’ works are placed in sustained conversation with each other for the first time, producing an arc of feminist criticism that speaks forcefully back to the abuse of a racist, white-dominated, patriarchal power.

Shanthini Naidoo is an established South African journalist and author of Women in solitary: Inside the female resistance to apartheid (Tafelberg, 2020). In 1969, South Africa’s apartheid government arrested anti-apartheid leaders and activists nationwide for a key planned show trial. Among them were seven women, three of whom (including Winnie Madikizela-Mandela) have since died. In this book, Naidoo uses rich interview material to share the previously unknown stories of the four imprisoned women who are still living: Joyce Sikhakhane-Rankin, Rita Ndzanga, Shanthie Naidoo, and Nondwe Mankahla.

Women in solitary appeared in many editions: Routledge published it under the same title in Great Britain in 2021. In the United States it appeared that same year as Women surviving apartheid’s prisons, by Just World Books. And it was translated into Dutch in the Epo publication: Vrouwen, verzet, en apartheid, in 2021.

Hanneke stuit is assistant professor of Literary and Cultural Analysis at the University of Amsterdam and is affiliated with the Amsterdam School for Cultural Analysis (ASCA). Her research focuses on the narratives and metaphors generated in and about spaces that seem peripheral to modernity, but are in many ways constitutive of it, specifically carceral and rural spaces.

Margriet van der Waal is professor by special appointment for South African literature, culture and history at the University of Amsterdam. Her research focusses on ways in which contemporary literature and art reflect political and cultural values within a globalized world. Central theme herein are the entanglement of identity and post-colonial power structures.

Intersectionality has, in recent years, rapidly grown into a buzzword in cultural, academic and political debates across the world due to the ongoing need to foreground a much wider array of voices than was formerly the case. Voices that can speak to the often troubling ways in which the various intersections of race, gender, sexual or cultural inequalities in people’s lives wreak havoc for some, but not for others. As Desiree Lewis and Gabeda Baderoon argue in their introduction to Surfacing: On being black and feminist in South Africa, mapping these interconnected power relations, so that they can be made visible and addressed, is no easy task. Especially not in an “age of advanced capitalized globalization” (Bogic qtd in Lewis and Baderoon), where some of the power structures in place have become so large and overbearing (like the imbrications of race and gender with market mechanisms), that situated perspectives tend to be drowned out by the boom of so-called progress.

It all started with And wrote my story anyway: Black South African women’s novels as feminism, Barbara Boswell’s book that Wits University Press published in 2020. The topics discussed in this book deserve more than a book review. Black feminism, and many other subjects on the broad grid of intersectionality deserve their own airing time. It was not hard to find other inspired academics and cultural producers to join the bandwagon in this series. We’re looking forward to creating fascinating episodes together with (South) African makers and theorists. Follow our website and YouTube channel, to stay updated on the coming topics and guests in our new series!

Footnotes – intersectional strategies in (South) Africa, is a bi-monthly online program. To make the conversations accessible to people from multiple lingual backgrounds, this series will be produced in English.