Virtual and Free of Charge

The theme of this year’s festival, Healing Journeys, speaks to the times we live in. A need for healing – be it mental, physical, spiritual or societal – is vital to the human condition, to our humanity, to our existence. This applies in both South Africa and in Europe, where despite our different contexts and histories, there exists common experience, and a mutual need for healing.

The films on show will present, through the lenses of European filmmakers, a snapshot of experiences of re-establishing oneself after sometimes traumatic and possibly cathartic experiences. They deal with journeys that include organic growth, transition, and processes of self-discovery. Many include a healthy dose of humour, bringing some possibly much-needed laughter into our lives. Much of the humour is of a more cerebral nature … films that make you smile and think at the same time. There is wit and wordplay, irony and satire, situational comedy that allows us to laugh at ourselves while reflecting on social absurdities and the contradictions in our lives.

Essentially, these are stories of hope, humanity and thought-provoking intrigue, show-casing new work by some of Europe’s most accomplished filmmakers alongside exciting new talent.

Notably, within the line-up of 18 films, 13 have women directors, a deliberate response to the gender inequality that persists across so many sectors in our societies, including the film industry.

It is our sincere hope that the film festival programme this year will strengthen our sense of society, generate thought and discussion while putting some smiles on peoples’ faces. 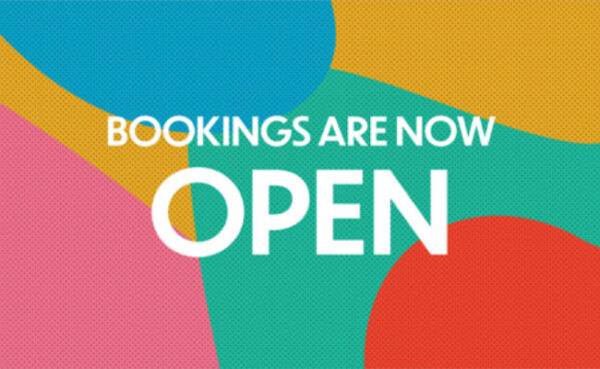 Availability of the films 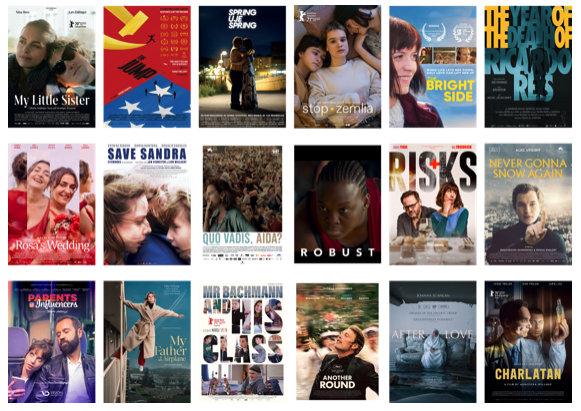 Here is a brief look at the 2021 line-up of films, nearly all of which have won awards, with the newer films also certain to do so.

A woman needs a new kidney, but is her husband ready to donate? Michael Kreihsl’s Risks and Side Events is a lively comedy about marriage, hypochondria, friends, architects, secrets, and taking risks. And the question: what is true love?

Jan Verheyen and Lien Willaert’s film Save Sandra is based on the true and highly topical story of a young girl diagnosed with MLD, a rare muscular disease. A central focus is her father’s fierce battle with the pharmaceutical industry to gain access to medical treatment, raising ethical and societal questions in the process.

Legendary director Agnieszka Holland’s politically charged drama Charlatantakes us inside the conflicted life of a non-conformist herbalist, exploring his unshakeable commitment to his calling, the illicit relationship with his assistant, and his inner demons, as he perseveres first under Nazi then Communist regimes in Czechoslovakia.

The 2021 Oscar for Best International Feature Film went to Thomas Vinterberg’s Another Round, in which four jaded high school teachers embark on a risky experiment to maintain a constant level of intoxication throughout the workday. Mads Mikkelssen is at his scintillating best in this mature blend of comedy, tragedy, and human behaviour.

Starring Gérard Depardieu and Déborah Lukumuena, Robust is an outstanding feature debut by Constance Meyer about an aging film star and a young security guard responsible for watching over him. Despite their differences, life has shaped them in ways more similar than they thought, and their unlikely friendship becomes a search for authenticity, laden with intrigue and humour.

In Mr Bachmann and His Class the ever-patient teacher uses unconventional methods to inspire his young citizens-in-the-making with a sense of curiosity and appreciation of the complex social and cultural realities of their worlds. Winner of the Berlinale’s Audience Award, Maria Speth’s life-affirming documentary beautifully highlights what a quietly spectacular process education can be.

Ruth Meehan’s The Bright Side is a moving and uplifting story about a stand-up comedian diagnosed with breast cancer. Armed with staggering levels of cynicism and a plethora of blackly comic jokes, her exit strategies are constantly upended when she encounters four powerful women whose unsolicited friendships challenge her, soften her and ultimately blow open her shut-down heart.

On the face of it, the brightly paced comedy Parents vs Influencers directed by Michela Andreozzi, seems to focus on the world of social media and influencers, but the heart of it is about change and resistance to change. And father-daughter relationships! And family!

A high-seas jump from a Soviet ship to a US vessel in an attempt for political asylum goes horribly wrong. About an ordinary man who became a symbol for freedom-seeking refugees everywhere, director Giedrė Žickytė’s The Jump takes us on a stranger-than-fiction journey that became an inspiration for people, pictures and politics, reaching all the way up to the White House.

Antoinette Beumer’s film adaptation of her own book My Father is an Airplane is about a woman’s poignant search for the puzzle pieces of her past, a journey that raises questions about parental boundaries, the risks and dangers of childhood as well its joys, and of what it means to be loved and understood.

Never Gonna Snow Again is writer/ director Malgorzata Szumowska’s exquisitely off-beat story about how a masseur and hypnotist gains acceptance and stature in a wealthy gated community, touching on class, immigration, and global warming, and imbued with moments of magical realism and subtle humour.

João Botelho’s The Year of the Death of Ricardo Reis brings to screen José Saramago’s novel about a fictitious author’s homecoming, his romantic dalliances, and his mysterious encounters with the ghost of Fernando Pessoa. Magnificent black and white cinematography fosters a unique aesthetic-narrative construction for the telling of this story.

Prolific director Icíar Bollaín has produced an absolute gem with the romantic comedy Rosa’s Wedding. It’s about a woman making radical changes in her life, and this includes a surprise wedding, much to the dismay of her family. A film about self-empowerment and gaining independence.

Run Uje Run is an biographical music dramedy about the way life takes turns you could never have imagined. Henrik Schyffert’s directorial debut features musician and actor Uje Brandelius playing himself in this unusual and darkly witty indie drama about appreciating what you have.

Achieving another success for writer-director duo Stéphanie Chuat and Véronique Reymond, My Little Sister is an intimate, personal tale about sibling love in which a sister gives her all to support her ailing twin brother, and inspires herself at the same time. A powerful look at the bonds both breakable and unbreakable in family.

Kateryna Gornostai’s Stop-Zemlia anchors its open-ended narrative around an introverted schoolgirl and her classmates in this sympathetic portrait of the tidal forces of teenage-hood. A deeply personal story about self-discovery and the patience it requires. ‘How our generation dreams, feels and experiences life’, said the Berlinale Youth Jury when awarding this film the Crystal Bear.

In Aleem Khan’s ground-breaking feature debut After Love, Joanna Scanlan puts in a phenomenal performance as a white, English Muslim convert uncovering secrets after the death of her husband, while exploring complex themes of loss, cultural identity and reconciliation.

Quo Vadis Aida? is an extraordinary co-production between nine European countries, in which a UN translator is caught between doing her job and trying to do something, anything, to help local inhabitants and her own family when the Serbian army takes over the small town of Srebrenica. Director Jasmila Žbanić has captured the harrowing events with compelling immediacy, earning the film an Oscar nomination earlier this year.

How to watch the films

We invite you to explore the film synopses and trailers on the website film pages to help shape your viewing programme.

How to watch films is also outlined on the film pages – it’s a simple process. All the films are Free for your viewing pleasure! Do remember the screenings are geo-blocked for South African viewing only.

Film lovers are encouraged to prioritise your favourites because access will be closed once the respective viewing capacities have been reached.

The European Film Festival 2021 is a partnership project of the Delegation of the European Union to South Africa and 17 European embassies and cultural agencies in South Africa: the Embassies of Austria, Belgium, Czech Republic, Denmark, Ireland, Italy, Lithuania, the Netherlands, Poland, Portugal, Spain, Sweden, Switzerland, Ukraine, and the British Council, Camoes Institute of Portugal, Diplomatic Representation of Flanders, French Institute in South Africa, Goethe-Institut, and Italian Cultural Institut. The festival is organised in cooperation with Cineuropa and coordinated by Creative WorkZone.