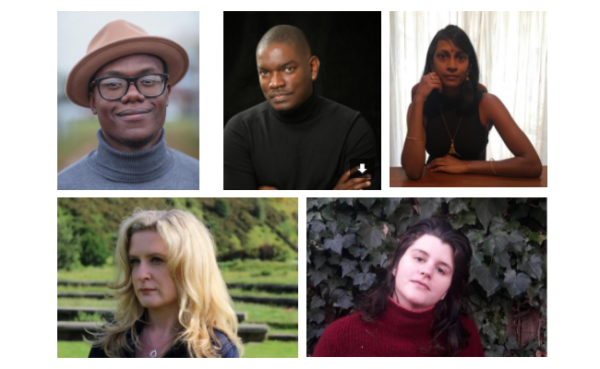 On 12 May The Commonwealth Foundation announced the regional winners of the world’s most global literary prize. Five short-story writers from Namibia, Sri Lanka, Jamaica, Scotland, and Australia, ranging in age from 26 to 48 years, have been recognised for ‘captivating’ stories that tackle themes of exploitation, social justice, exclusion and belonging ‒ as well as family, myth-making, and the ongoing legacy of two powerful matriarchs.

The Commonwealth Short Story Prize is awarded annually for the best piece of unpublished short fiction from any of the Commonwealth’s 54 Member States. It is the most accessible and international of all writing competitions: in addition to English, entries can be submitted in Bengali, Chinese, French, Greek, Malay, Portuguese, Samoan, Swahili, Tamil, and Turkish. The overall winner will be announced via an online ceremony on Tuesday 30 June.

The international judging panel, chaired by Zoë Wicomb, has chosen the five winning stories, from a  shortlist of twenty-five. This year’s award saw a total of 6423 entries from 50 Commonwealth countries ‒ a 25% rise in entries as compared to the previous year.

Recounting a family history of love, violence, and dispossession, ‘Granddaughter of the Octopus’ is an experimental short story filled with humour, voice, and quiet, earnest truths. The grandmother at the centre the story is a powerful woman with a unique legacy...

Rémy Ngamije is a Rwandan-born Namibian writer and photographer. He is the founder, chairperson, and artministrator of Doek, an independent arts organisation in Namibia supporting the literary arts. His debut novel The Eternal Audience of One is forthcoming from Scout Press (S&S).

‘I Cleaned The-’ is a story about the ‘dirty work’: domestic labour, abandonment, romantic encounters behind bathroom doors, and human waste, which is to say ‒ the things we leave behind.

Sri Lankan writer Kanya D’Almeida’s writing has appeared on Jaggery and The Bangalore Review, and she hosts ‘The Darkest Light’, a podcast exploring birth and motherhood in Sri Lanka. Commenting on her win, she described the prize as ‘such a haven for writers across the world ‒ it is perhaps the only forum large enough to accommodate the many expressions of language that thrive from region to region’.

In ‘Turnstones’, a young woman at a prestigious university battles with feelings she ‘doesn’t belong’ when, one night, a storm blows in some unusual trespassers…

Carol Farrelly is a fiction writer from Glasgow, Scotland. She described her win as ‘an utter joy’. She writes, ‘to know my story spoke to these fantastic judges ‒ it makes all the tussling with words and silences, and all the digging towards the right ending, feel worthwhile.’

In ‘The Disappearance of Mumma Dell’, a matriarch’s funeral gets derailed just before her body goes missing, causing panic in a rural Jamaican district that is also in danger of vanishing from the map.

Roland Watson-Grant is a Jamaican novelist, screenwriter and travel writer. His first novel Sketcher (2013) was published by Alma Books (UK) and has been translated into Turkish and Spanish. Previously shortlisted for the 2017 Prize, Roland entered the competition because, he says, ‘I write in the spaces where cultures have conversations. I eavesdrop on what one culture - based on geography or time - has to share with another. I couldn’t ignore a platform that is dedicated to the very same thing.’

The winning story, ‘Fertile Soil’, tells how something is happening in the city a woman lives in, she is sure, something is not right ‒ almost as if she’s no longer welcome.

Katerina Gibson lives in Melbourne, Australia. Katerina’s short stories have won the VU Short Story Prize, been longlisted for the Peter Carey, and otherwise been published in Overland, The Lifted Brow, and Kill Your Darlings. Katerina described winning as ‘like accomplishing one of those lofty, absurd dreams, like starting a commune in Tasmania, or learning to fly light hobbyist planes ‒ it’s all so ridiculous and delightful’.


‘Rereading a smaller group of stories, looking at them once again in the fiercer, narrower light of competition, is a daunting step in the judging process. We celebrate difference and recoil from the idea of ranking works that are so diverse and encompass such a range of subjects, but that is what we agreed to do. We have come to know these stories intimately, thought about them more carefully after previous debates, and juggled them in our hearts. Thus we meet with fingers crossed and loins girded for agonistic discussion and argumentation. But we have also come to know and trust each other in this process, and so we arrive at our regional winners with their captivating stories of insight and compassion, stories that in their distinctive voices speak to our troubled times.’

The five regional winners’ stories will be published online by the literary magazine Granta in the run-up to the announcement of the overall winner and published in a special print edition by Paper + Ink.

Luke Neima, Granta’s Deputy Editor, says, ‘Granta magazine is proud to be partnering with the Commonwealth Short Story Prize in this its tenth anniversary, by publishing the regional and overall prize winners for 2021. Over the past decade the reach and the influence of the Commonwealth Short Story Prize has grown rapidly, and for very good reason. This year’s regional winners bear testament to the quality of the writing that the prize attracts, and its success, time and again, in bringing to light talented new voices who would otherwise have no clear route to finding a global audience.’

Now in its tenth year, the Prize has developed a strong reputation for discovering new writers and bringing them to a global audience. 2020 Pacific winner, Australian Andrea E. Macleod, secured an agent, as did 2020 overall winner Kritika Pandey, from India, who has also had work commissioned by BBC Radio 4 and the Kenyon Review as a result of the visibility gained through the prize.

The 2021 overall winner will be announced during a special award ceremony which will be broadcast online at 1pm BST on 30 June 2021.

Sign-up to our newsletter to receive a link to the broadcast nearer the time at commonwealthwriters.org/signup or follow us on Twitter, Facebook, or Instagram @cwwriters to find out more. The event will provide everyone with a chance to hear excerpts from the stories, to meet the regional winners and to find out, first-hand, who has been selected as the overall winner of the Commonwealth Short Story Prize 2021.

Keep up to date with the prize and join the conversation via: