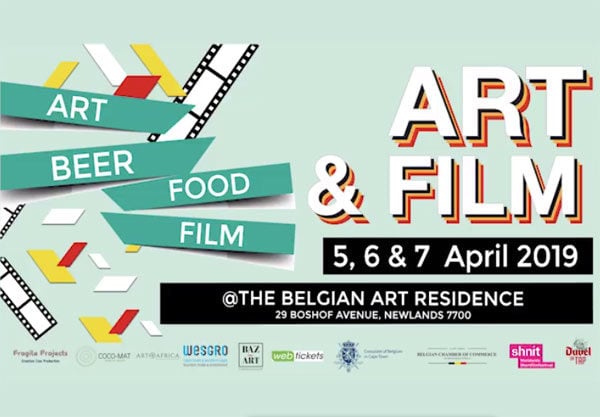 From 5 till 7 April 2019, in the evening, you will have the opportunity to watch some of the best Belgian movies at the Belgian Residence, temporarily transformed into an art hub, at 29 Boshof Avenue in Newlands, Cape Town.

The soul of this festival is to build and to enhance a cultural bridge between the South African & Belgian art & film industry.

“We believe such an event creates a great environment to link and raise awareness towards the developing film industry in both countries. In the last decennia, both South African and Belgian movies have been developing and transforming quality scripts on to the big screens, embracing future collaboration between Belgium and South Africa. The two dimensions are now connected.”

Belgian delicacies and drinks will support the festival, and both Baz-Art & Art@Africa assist in turning a building and its garden into an Art Residence.

Special: First “Duvel on Tap” ever to be poured in Africa on the opening night.

First-time director Kenneth Mercken makes use of his own cycling experiences to explore competitive instinct and drug culture in sport.

“Young Felix grows up as an inside spectator at cycling races, a bizarre environment where violence and drugs seem to reign. Following his father's footsteps, Felix discovers that his body is not made for the game.”

El Arbi and Fallah were the only two Moroccan-born students in their Belgian film school. While their white peers aspired to fine art, they dreamed of Hollywood. Inspired by gritty crime dramas with a fondness for spectacle, the pair took to the streets with cameras. They made a feature, a short, some TV and in 2015, they won the Toronto film festival’s Discovery Award for their second feature, “Black,” a streetwise spin on Romeo and Juliet, set in Brussels.

Their latest: “Gangsta” (aka “Patser”, which is Flemish for “show-off”). A humorous drug-deal-gone-bad caper in the Guy Ritchie vein, it plays like “Amélie” on crack.

“Antwerp. The lives of four dealer friends, who want to become real life swaggers, spin out of control when they steal a shipment of cocaine. They trigger a full out war between them, an Amsterdam drug lord and the ruthless Colombian cartels.”

Make it a real Sunday afternoon Family activity; indulge in Belgian food and beers, Art in the garden and the house, enjoy music, garden activities and the swimming pool will be open.

The Son of Bigfoot is a Belgian-French computer-animated comedy-drama film. It is directed by Ben Stassen and Jeremy Degruson. Upon release, the film received positive reviews from critics and grossed $50 million worldwide against its $20 million budget.

“Teenage outsider Adam sets out on an epic and daring quest to uncover the mystery behind his long-lost dad.”

It was screened in the International Critics’ Week section at the 2018 Cannes Film Festival. It received seven nominations at the 9th Magritte Awards and won five, including Best Film and Best Director for Guillaume Senez.

“Olivier is fighting with his comrades at work against injustices, but one night his wife Laura leaves him and the kids on 9 and 6. He must now meet another struggle and face up to his new responsibilities. Can he find a new balance?”

To enhance our cultural relationships, we work in partnership with Shnit Worldwide Shortfilmfestival, who will be screening their “Made in SA selection”. The best of your locally produced, recent South Africa-released short films.

This festival is a first of a series that will support all Belgian Art platforms in South Africa.

Tickets for each screening is 50 ZAR for all ages.

As it is an outdoor event, dress warmly. In case of rain, we will have a plan B.

Tickets is on sale on Webtickets.

Keep an eye on our Facebook page for movie trailers & updates.