There are a few myths that we South Africans love to sell to the world about ourselves.

We are an exceptional, miracle, rainbow nation having achieved political transformation without a bloody revolution.

Unlike the barbarians of everywhere else, we live by the humane principle of ubuntu: I am because you are.

“So much for ubuntu, a lovely idea in theory, but certainly not the experience of Congolese, Mozambicans, Somalians and other Africans in some of our cities right now.”

Unfortunately for the country’s tourism marketers, our propaganda and arrogant notion of exceptionalism are being exposed for what they are: myths that we have created in order to live in a state of denial about our actual reality.

Business confidence is at a twenty-year low, scream the headlines. The conditions for doing business are worse today than a year ago, with the private sector more pessimistic about the future. Not that long ago, business confidence was on a high with the election of Ramaphosa as president of the ANC and of the country. But, as the joke circulating on social media indicates – there’s a new sex position called the Ramaphosa: get on top and do nothing – there’s increasing disillusionment with the absence of political leadership in our country.

The de facto president appears to be the secretary general of the ANC, a highly compromised and disrespected figure, from whom we seem to hear more than from the president.

As I write this article, Nigerians are heading to the airport to board a plane to take them back to their country, fleeing South Africa for fear of their lives. Not because of a tsunami, hurricane or other natural disaster, but because of bloodthirsty South Africans intent on murdering them simply for being from another African country!

“An average of 58 people living in South Africa are murdered each day! The ISS says that murder has risen by 35% in the last seven years; the longer we are a democracy – we celebrate 25 years of post-apartheid Nirvana – the more we are killing each other.”

So much for ubuntu, a lovely idea in theory, but certainly not the experience of Congolese, Mozambicans, Somalians and other Africans in some of our cities right now.

At the same time, social media has been full of people praising Robert Mugabe after his passing as an African hero for standing up to the West. Without any sense of irony, these praise-singers see no link between their hero and the killing – by South Africans – of Zimbabweans who fled their country because of how Mugabe wrecked it.

The hypocrisy of being African when supporting African sports teams or sportspeople playing in international tournaments after South Africa has crashed out or has been unable to secure entry into these tournaments, or when some African leader is put on trial for crimes against (invariably) his people, is astounding.

For now South Africans – at least some of its politicians – are blaming these leaders for causing their citizens to flee to South Africa. We are opportunistic Africans, African when it suits us politically in our standing up to the West, to our former colonisers, to those who maltreat African migrants and immigrants in Europe, and yet, violent Afrophobes in our own country.

Having suffered sports boycotts – along with other forms of international pressure – for apartheid which was declared a crime against humanity, our miracle, ubuntu, most-progressive-constitution nation South Africa is now being boycotted by other African countries (Zambia and Madagascar declined to play football friendlies against South Africa), for the heinous crimes of violence against and murder of other Africans! 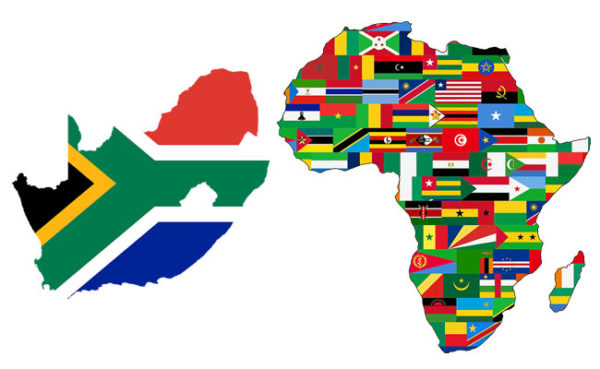 But it is not only Africans from other countries who are experiencing violence in South Africa. The recently-released crime statistics reveal that just about every serious violent crime indicator has increased in the last twelve months.

An average of 58 people living in South Africa are murdered each day! The Institute for Security Studies (ISS) says that murder has risen by 35% in the last seven years; the longer we are a democracy – we celebrate 25 years of post-apartheid Nirvana – the more we are killing each other.

Then there are the newspaper reports covering the trial of the “Dros rapist,” just one example of the utter sickness of a society in which children are abused, violated and killed. A seven-year-old girl child is called to give evidence against a man who [allegedly] intentionally followed her to the toilet to violate her!

There was an increase in the number of rapes last year too, with an average of 114 rapes recorded by police each day. As we have seen from numerous cases in the last two weeks, women remain vulnerable. Even though there has been a decline in the total number of women murdered in the last year, a woman is still killed on average every three hours.

These are hardly statistics that celebrate ubuntu, that affirm a “miracle nation” that escaped a bloody revolution; on the contrary, they reflect a country engaged in a low intensity civil war.

And as the violence increases, so do the demands of the middle-class for the death penalty to be re-introduced, thereby further undermining the most-progressive-constitution-in-the-world country.

It is September and so it’s spring in South Africa. But as for our politics and the feelings of despair and disillusionment, we are in a dark, dark winter.

At least, things can only get better from here?