“For decades on end, the same brew from the same brewery was not available to the black population due to colonial politics. This is wat makes the Namibian beer industry unique: it has a very particular history.”

Menán van Heerden chats to Tycho about the particular history of Namibian beer and this Namibian industry’s cultural, economic and political relevance. 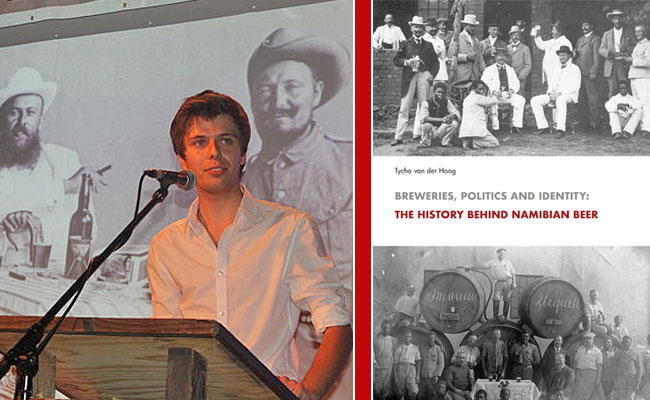 Countries such as Germany and Belgium are famous for their beer. What makes the Namibian beer industry unique?

Namibian beer is immensely popular in Namibia itself, but is also celebrated on a global scale: Namibian beer is for sale in around 20 countries and has won several international awards.

In the past thirty years, Namibian beer has become an important aspect of national pride. Its history, however, is very different.

For decades on end, the same brew from the same brewery was not available to the black population due to colonial politics. This is wat makes the Namibian beer industry unique: it has a very particular history.

Namibian beer has made a remarkable transformation from an icon of apartheid politics to a symbol of an independent, inclusive nation. This fascinating history has now appeared as a book with the publisher Basler Afrika Bibliographien, titled Breweries, politics and identity: The history behind Namibian beer.

What is the most interesting story / stories that you have heard about the Namibian beer industry?

Many people are surprised to hear that Namibian beer is brewed according to the Reinheitsgebot, a German purity law from 1516. Namibia Breweries Limited, the company responsible for Namibian beer, consciously choose to brew according to this set of rules.

For my own research, I was mostly interested in the history of the Namibian brewing industry. I found it captivating to browse through endless heaps of archives files, and discover numerous small and long forgotten breweries from early 1900. The most influential breweries of those early days were amalgamated into the company that currently dominates the national brewery industry, namely Namibia Breweries Limited.

At the same time it is of paramount importance to realize that Namibia already had a centuries-long tradition of home brewing. I discovered numerous recipes from precolonial times through which different ethnic groups were able to brew beer.

Beer always played a significant role in society, not only as a leisure activity but also in terms of religion and tradition. Today, Namibia has a very interesting mix of “modern” beer and a strong tradition of home brewing.

You conducted 7-8 months of fieldwork in Namibia and South Africa. What were the most interesting things you learned about these two countries (in general)?

Namibia and South Africa are very much intertwined, in a historical sense. This is also reflected in terms of beer. “South West Africa”, as Namibia was known during South African occupation, was considered by South Africa as a fifth province and was thus introduced to apartheid.

Beer was one of the most important instruments of apartheid politics, because it was a marker of racial identity. When South West Africa was awarded to South Africa as a mandate territory in 1920, the third article of the mandate agreement dealt with alcohol. This shows the significance of this issue.

The mandate agreement stated that alcohol was only available to white people, not to black people. Beer was arguably the most important form of alcohol, a type of drink that penetrated all layers of society. To make this commodity unavailable to the majority of the population is a serious and powerful decision. From then on, the production and consumption of beer was a contentious and political issue.

Tell us more about the connection between breweries; colonial and apartheid politics; and identity.

Many important historical events influenced the beer market, whether it was the inauguration of the German protectorate in 1884, the influence of South Africa and national independence in 1990.

It proves that beer is more than “just beer”: it is a product with significant cultural relevance, economic importance and political relevance.