“By interviewing three (generations of) sangomas in rural, semi-urban and urban settings, I learned that there are many differences between the healing practices. This triggered me to find out where these variances originated.”

Gerda Hooghordel is a PhD candidate at the African Studies Centre Leiden. Her research focuses on the transmission of healing knowledge and practice by female Zulu sangomas in (the vicinity of) Durban, KwaZulu-Natal. It also looks at how this knowledge and practice is rooted in indigenous religion, in what way the healing knowledge is constructed and how the processes of this knowledge production are transmitted to succeeding generations of healers in urban society. She discusses this with Cliffordene Norton.

Would you tell us more about your PhD research and what inspired it?

My research is about transformations in the healing practices of Zulu sangomas.

Since I was a teenager, I have been fascinated by the phenomenon of religion – not so much with doctrinal issues, but more with the way people believe in relation to their character and their attitudes towards issues like health and illness, sexuality, equality, etc. In the 1990s, during my theological studies, I was introduced to African indigenous religions and how these are intertwined in day to day life; I was captivated. My master’s thesis was on the psychology of religion (it dealt with religious views on illness and affliction) and on Zulu rituals in honour of Nomkhubulwana, the Heavenly Princess. As sangomas’ practices are a mixture of religious and medical elements, my spheres of interest like religion, health, psychology and philosophy come together in this research.

By interviewing three (generations of) sangomas in rural, semi-urban and urban settings, I learned that there are many differences between the healing practices. This triggered me to find out where these variances originated. In my study, I look at the causes of and reasons for such differences. Within the traditional (or indigenous) healing system, I focused on knowledge transfer and training; outside of the system, I explored historical, social and political dynamics, as well as interrelations with cosmopolitan healthcare and religious institutions.

What are your findings thus far?

I have found that there are many reasons for differences in healing practices. Some are related to the practice’s location, and others (like the use of cell phones) are simply linked to the fact that sangomas and their patients are living in our contemporary society. A major issue concerning the variances, however, is in the training, which does not have a fixed curriculum but can be regarded as experiential.

Currently, indigenous healing is at a vital juncture. The latest South African healthcare legislation recognises the traditional healthcare system as equal to cosmopolitan healthcare; individual indigenous healers now have to register. This institutionalisation brings some obligations that many sangomas are not keen on. Although acknowledgement is important for them, they also want to be able to hold on to certain characteristics of indigenous healing. It seems a paradox; sangomas incorporate all kinds of new elements in their healing practice, yet they hang on to so-called “traditional” elements. 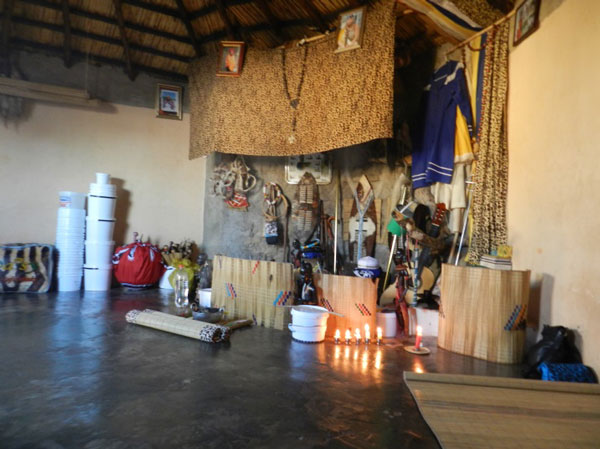 Your research focuses on the healing knowledge and practice of female Zulu sangomas in (the vicinity of) Durban, KwaZulu-Natal. How would you describe your fieldwork?

Due to my job as a secondary school teacher, fieldwork was restricted to school holidays. I therefore visited Durban three times – in 2012 and 2014. The fieldwork periods were very diverse.

The first time, it was my intention to discover the region, learn about Zulu culture, get acquainted with people and do additional literature study. During my fieldwork, I was a regular visitor to the UKZN library at Howard College Campus and the Killie Campbell Africana Library, which is housed in Muckleneuk, a neo-Cape Dutch-style house in Durban.

In the second period, I met my key informant, Bongani, for the first time. He was a sangoma himself, and he familiarised me with a wide range of subjects that are somehow related to indigenous healing. Bongani had a comprehensive network among indigenous healers, and he also introduced me to several inyangas and sangomas, three of whom I interviewed extensively. 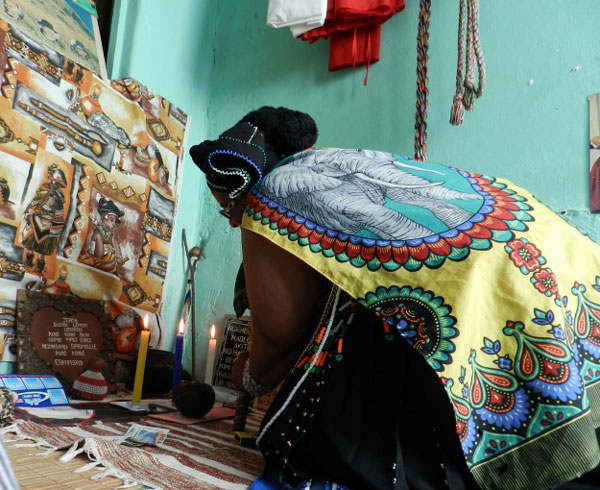 When I visited Durban in 2014 for the third time, I was allowed to attend eight healing sessions at a few sangomas’ compounds. Healing processes often include several sessions; most of these are carried out in the sangoma’s consulting room, others at locations appropriate for the specific patient.

For example, one Saturday, we were at the healing session of a male patient. When he returned a week later, his healing process continued with a session in the consulting room; then, we (the patient and his wife, four sangomas, about ten trainees and we ourselves) took our cars and went to the Mtamvuna estuary for the second part, and we ended up in Pietermaritzburg at the patient’s home for the last part of the healing procedure. Most sessions were accompanied by singing, drumming and dancing. After the final dance – by this time, it was way past midnight – the patient offered all of us a meal. 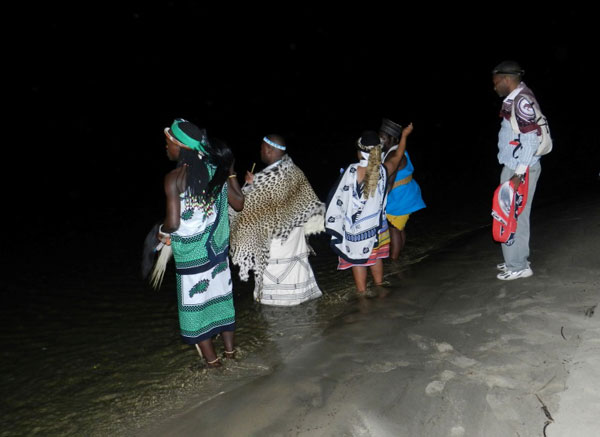 Healing session in the river 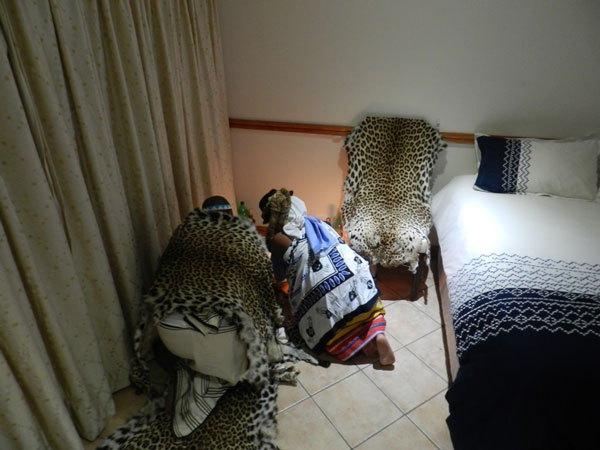 In the patient’s bedroom

What surprised me most during my fieldwork was the kindness and hospitality of all the people I met, but above all, the inyangas and sangomas, who opened up their healing practices for me and shared their thoughts and their wisdom.

What challenges have you faced while doing your fieldwork?

The first period was the most challenging. For me, as a Western researcher, it was rather a quest to find (someone who knew) a sangoma and to get a key informant from within indigenous healthcare. It struck me that the marks and dividing lines left by apartheid are still very palpable in contemporary South African society.

What have you learned about Durban, where you’ve done your research?

Durban was a fine place to stay while conducting the fieldwork. It was an excellent operating base for my trips to sangomas in the rural area of the Valley of a Thousand Hills, as well as the several (semi-)urban areas. My time in Durban was limited, so my schedule was tight and I didn’t take much time to see the city.

The WHO’s (World Health Organization) definition of health is “a state of complete physical, mental and social well-being and not merely the absence of disease or infirmity” – a holistic view similar to the one in indigenous healing. With regard to the subject of indigenous healing, there are (also in popular media) many prejudices: sangomas are witches, and indigenous healers are, in general, charlatans. Although it is true that some people call themselves sangomas in order to earn easy money, there are many indigenous healers who have a vast amount of knowledge about herbal medicine and insight into human nature. They help patients to cope with hardships in their lives. I hope that my research will encourage people to look at indigenous healing in a more unbiased way.

Does the knowledge and practice of traditional healing grow or decrease in contemporary South Africa? Why?

About 80% of the South African population (also) consult indigenous healers when not feeling well. My impression is that those numbers will not decrease for some time. These people consult an indigenous healer not only in cases of physical or mental illness, but also with psychosomatic symptoms or distress. Many are comforted by the holistic approach that is characteristic of the indigenous healing practice. Indigenous healing is in line with their world view, and consequently it is part of South African society.

“What surprised me most during my fieldwork was the kindness and hospitality of all the people I met, but above all, the inyangas and sangomas, who opened up their healing practices for me and shared their thoughts and their wisdom.”

With regard to the knowledge of indigenous healing, there seems to be a tendency towards a shorter training. For sangomas who were trained in the 1960s and 1970s, the training was three to sometimes even seven years. Currently, the training period is often one to two years. Because there is not a standard curriculum, it is hard to tell what contemporary apprentices do and do not learn. Besides knowledge, what is especially transferred in training are tools to create one’s own range of medicine and rituals.

In which ways are healing processes transferred to the next generation?

Sangomas believe they are “called to become sangomas” by the ancestors. Such a calling is often revealed in some kind of illness; the “called one” will be healed only by starting the sangoma training.

In the training, most apprentices live at the trainer’s compound, where they learn how to be a sangoma. One part of the training is the transfer of knowledge about herbal medicine (muthi). Another part is learning to diagnose, which involves communication with the (alleged) ancestors. The last part – and maybe the most important one – for the trainee is obtaining a healing identity. These elements a sangoma experientially applies in the execution of healing processes. After graduation, most sangomas start their own healing practice, where eventually they get their own apprentices. It is an ongoing process of reinvention.

What is urbanisation’s influence on the transfer of healing processes?

The influence of urbanisation on indigenous healing is manifold. Two issues are as follows:

Firstly, in rural areas, trainers used to go to the forest to harvest herbs, roots, etc for the preparation of medicine. In urban areas, sangomas often depend on muthi markets and pharmacies. In this case, it is important to teach trainees how to recognise (pieces of) herbs after harvesting and which vendors are trustworthy. In Durban, a herbalist has started training young urban sangomas specifically with this intention. 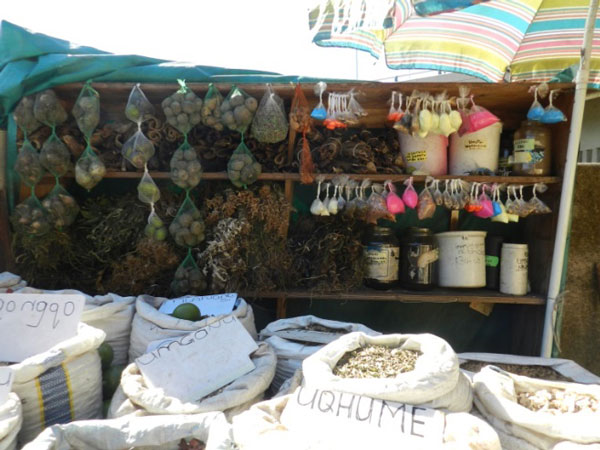 Secondly, sangomas who had their training in rural areas sometimes also have to adjust their healing rituals due to city regulations. They will teach their apprentices how to apply and adapt to the urban standards.

How do you see your research impacting your field?

My research is a contribution to the academic debate on knowledge transfer in education and its influences on how a healing practice is conducted. It is also an “outsider’s view” on the position of indigenous healing in contemporary South Africa, to complement recent (academic) literature from writers from within the South African traditional healthcare system.

Lived experiences of people during a time of disaster and crisis

Left out of the narrative – an interview with Loes Oudenhuijsen